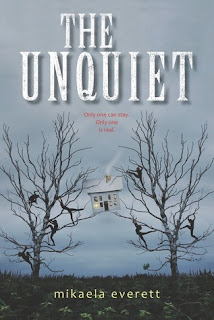 From Goodreads:
For most of her life, Lirael has been training to kill—and replace—a duplicate version of herself on a parallel Earth. She is the perfect sleeper-soldier. But she's beginning to suspect she is not a good person. Fans of eerily futuristic and beautifully crafted stories such as Never Let Me Go, Orphan Black, and Fringe will find themselves haunted by this unsettling debut.

The two Earths are identical in almost every way. Two copies of every city, every building, even every person. But the people from the second Earth know something their duplicates do not—two versions of the same thing cannot exist. They—and their whole planet—are slowly disappearing. Lira has been trained mercilessly since childhood to learn everything she can about her duplicate, to be a ruthless sleeper-assassin who kills that other Lirael and steps seamlessly into her life.

An intricate, literary stand-alone from an astonishing new voice, The Unquiet takes us deep inside the psyche of a strong teenage heroine struggling with what she has been raised to be and who she really is.

My Review:
I enjoyed this book a lot! But it was pretty darned sad! It wasn't really an action book, this book was more reflective, and wondering. Though not in a positive light, since these kids have been raised pretty much since birth to kill and then take over the version of themselves from the other world. Yeah.

There were a few main parts, the training, the new life, the life after some bad stuff, and then then war. So basically it was scary and sad and creepy. It was pretty great, but it was a downer. Like, a big one, pretty much every single page.

There was wondering of if she was a good person or not, there was death, and pointless suffering, or at least, that's what it felt like to me. We got to see several journeys, because this takes place over a couple of years, from her "sister" to other sleepers, yeah.

And that ending, oh! Since this book came out 3ish months ago, I can spoil and say, oh, geez, they're going to kill the sleepers? Why? They did their jobs, they deserve to have something good, not just to be thrown away like trash! And that it's been happening over and over again? Just a bit pointless!

Really great book, but it's not going to be for everybody!