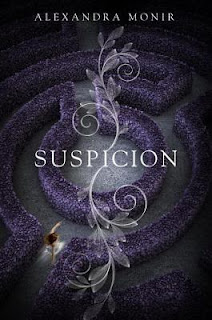 From Goodreads:
“There’s something hidden in the maze.”

Seventeen-year-old Imogen Rockford has never forgotten the last words her father said to her, before he, her mother, and the gardens of her family’s English country manor were consumed by a blazing fire.

For seven years, images of her parents’ death have haunted Imogen’s dreams even as she moved away and attempted to start over. But some attachments prove impossible to shake—including her love for her handsome former neighbor Sebastian Stanhope. When a letter arrives that forces Imogen to return to her family’s estate, she quickly discovers the dark secrets that her father warned her about. At their center is Imogen herself—and Sebastian, the boy she never stopped loving.

Why the time hasn't come yet...
Mostly because I don't have a copy, and a bit of confusion as to when it came out. But I really want to read it! What about you guys? Happy reading!
Posted by Louisa @ Words I Write Crazy at 6:00 AM