Week 13 Review: The Ship Beyond Time 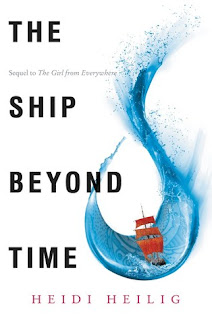 From Goodreads:
Nix has spent her whole life journeying to places both real and imagined aboard her time-traveling father's ship. And now it's finally time for her to take the helm. Her future lies bright before her—until she learns that she is destined to lose the one she loves.

Heidi Heilig weaves fantasy, history, and romance together to tackle questions of free will, fate, and what it means to love another person. At the center of this adventure are extraordinary, complicated, and multicultural characters who leap off the page, and an intricate, recognizable world that has no bounds.

My Review:
This book was just really fantastic! I enjoyed this sequel, and being in this world again with these characters! The whole time traveling thing is just a really awesome thing to explore, and it can be do in so many different ways! Loved how it was done in this world!

Nix is hit with a heck of a fate-to lose the one she loves to sea. Which makes her think of Kash. It's kinda the opposite of this one book, with the fated death of loved one, but the loved one, the two people it could be, are switched!

Fate is a big thing in this book, fighting it. Which is a bit of a mixed bag. On one hand, you know what's coming, give or take. On the other, sometimes you don't like what's coming. The last book dealt with her father's fight with fate. This book, it was Nix's turn!

I was kind happy that Blake was a part of the ship's crew. That didn't last long, what he did, that wreaked basically everything! So I think his choice in the end, was fitting. He did a wrong to correct another wrong, and now he's finally going to right it.

Fantastic book, and I can't wait to read more from Heidi Heilig!