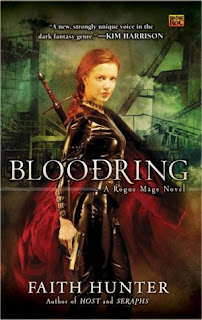 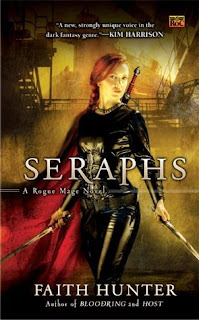 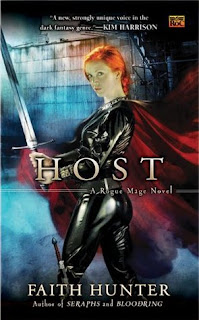 From Goodreads:
In a novel filled with exhilarating action and lush imagery, Faith Hunter portrays a near-future world, caught in the throes of an ambiguous apocalypse, where a woman with everything to hide finds her destiny revealed....

No one thought the apocalypse would be like this. The world didn't end. And the appearance of seraphs heralded three plagues and a devastating war between the forces of good and evil. More than a hundred years later, the earth has plunged into an ice age, and seraphs and demons fight a never-ending battle while religious strife rages among the surviving humans.

Thorn St. Croix is no ordinary neomage. All the others of her kind, mages who can twist leftover creation energy to their will, were gathered together into Enclaves long ago. There, they live in luxurious confinement, isolated from humans and exploited for their magic. When Thorn's powers nearly drive her insane, she escapes - and lives as a fugitive, disguised as a human, channeling her gifts for war into stone-magery and the pacific tasks of jewelry making. But when Thaddeus Bartholomew, a dangerously attractive policeman, shows up on her doorstep and accuses her of kidnapping her ex-husband, she retrieves her weapons and risks revealing her identity to find him. And for Thorn, the punishment for revelation is death....

From Goodreads:
From the author of Bloodring comes its thrilling follow-up, set a century after the apocalypse and portraying a world in the throes of an ice age - and a never-ending battle among seraphs, demons, and humans....

Living among humans in a postapocalyptic ice age, neomage Thorn St. Croix has learned to count on her friends, but she's lost count of her enemies. She is a source of both fear and fascination for the people of Mineral City. Her powers can save them from the forces of evil, but can also attract demon spawn and succubae. And fighting on her own turf nearly gets Thorn and those she holds dear killed.


But Thorn's ultimate test awaits deep under the snow-covered mountains beyond the village, where an imprisoned fallen seraph desperately needs her help. There, hidden in the hellhole, the armies of Darkness assemble to ensure that this subterranean rescue will be Thorn's final descent...

From Goodreads:
In a post-apocalyptic ice age envisioned by Faith Hunter in Bloodring and Seraphs, humans continue their fight to survive amid the warlike forces of Light and Darkness—and struggle to understand the seraphic and demonic beings who have invaded their world....

After risking her life to save the residents of Mineral City from a fallen seraph of the underworld, Thorn St. Croix finds herself finally accepted, albeit warily. Not so the mage who arrives from the Council of Seraphs, and who could be her greatest ally—or her most dangerous foe.

But a terrible danger threatens Mineral City. The bonds of the Dragon have been loosed and it will soon be free. Darkness and its minions overtake the town, setting off avalanches and cutting off communications. At the mercy of Darkness, Thorn must rally the townspeople together—for only as one can they survive. But her loyalty will be tested by someone she once lost to the Dark: her twin sister....

My Review:
This series was absolutely amazing! I just loved the world, and I wanted to know more about everything! The details of the world were just stunning, and I loved being with these characters! It was just so enjoyable to read these books!

This world of neomages, angels, demon spawn and more, was just so intriguing! That it caused the apocalypse, the world in an ice age, with millions of people who were killed...yeah, not a place I'd like to live! Plus, the mix of our current tech very much dated and then more primitive things like horses being a main source of transportation, was so odd but so great to read!

Mages have been told that they have no souls. And Thorn believes it. I don't, because yeah, mages basically humans evolved, that they can tap into the energies from the beginning of Creation. Don't think that'd mean that they'd be born without souls!

These books were so massive, and had such depth! I enjoyed every world, the complicated politics, and these amazing characters and what they have to face! And how Thorn grew in each book, facing more and more! She was incredible!

I would really love it if we'd get more books in this series, which is what the 2 anthology collections are meant to be a start of, I hope! Because I desperately need more!