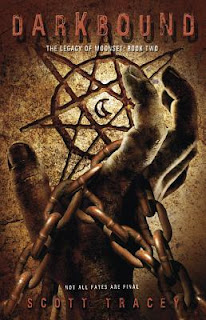 From Goodreads:
Malcolm has seven days to unravel a twenty year old mystery, find a body, capture a killer and keep a demon at arm's length.

No one hates being a witch quite like Malcolm. But if there's one thing worse than being a witch, it's being a Moonset witch. There are very few things in his life that he can control, and after a fight with his siblings, he's losing his grip on what he's got left.

A creature as old as Hamelin has crept out of the Abyss, and its siren song has infected the teenagers of Carrow Mill compelling them, at first, to simply be swept away in love. But love soon turns dangerous, as passion turns to violence and an army of sociopaths is born.

The Pied Piper isn't just a story, and he's got his eyes set on Malcolm, promising a life of freedom from magic and the shackles of the Moonset bond. As Carrow Mill burns, Malcolm must make the hardest choice of his life: family? Or freedom?

My Review:
I enjoyed reading this book so much! We got to see much more of this world, and how magic works, and yeah, it was so fantastic! Plus, we get Malcolm's POV, which was really interesting, given that he's the one that doesn't want to have anything to do with magic!

I do wish that I'd read this book closer to Moonset, because I'd forgotten a few details. This book was still incredible, it's just my bad memory! Because the escaped Prince is out and about because of the events of the last book! And he's a big threat!

I really enjoyed the bits at the beginning of each chapter, because they added so much to the story! Interviews from people who'd been around when the original stuff was going on. It helped piece together what was going on now!

That ending was evil, and I really hope that even though this series was dropped by the publisher, that the series continues via self publishing, because I really need to read more! Evil cliffhanger ending!