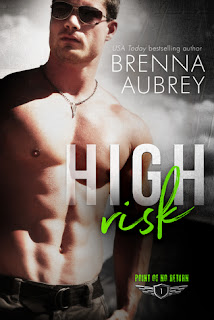 From Goodreads:
He's a damaged soul living on the edge and it's her job to keep him in line...

He'll break all the rules to keep the last promise to his best friend.

Commander Ryan Tyler is a true American hero--a former Navy SEAL and the man who saved the International Space Station. Yet he couldn't save the best friend who died in his place. Fallout from that tragic accident thrust Ty into a dark and dangerous lifestyle, but when he's given the unexpected chance to fly again, he grabs it.

Gray Barrett never imagined that her dream job as a flight psychologist would depend upon keeping an astronaut-gone-wild on the straight and narrow. Yet here she is, babysitting the gorgeous and insufferably cocky Ryan Tyler. Everything hangs on his ability to maintain a new image for the public eye to make up for past sins. But as they spend time together, she's drawn to the shattered man who refuses to let anyone through the impenetrable façade he's built around himself.

Their goals are firmly in place and almost within grasp. The only thing that could screw it up is falling in love.

High Risk is part 1 in Ryan & Gray's duet. Their HEA is in book 2, High Reward, which is available to pre-order.

My Review:
I enjoyed reading this book so much! I really enjoy her first series, and that this is a spin off, and Adam makes a few appearances, yeah, I was really excited to read this book! The idea of a astronaut basically needing a babysitter to ensure he didn't portray a negative image, yeah, sounds great!

I really enjoyed getting to know these characters, Gray, who has a burning passion for space, and because of her circumstances, channeled that passion into a way she could be a part of the journey, which is really admirable of her. When most peoples dreams are denied, most people give up, not find a way to work with what they've got.

Ryan doesn't want to be a hero. His best friend died and he couldn't help him-he wasn't allowed to, even though his training as a SEAL told him otherwise. He's spiraling pretty deep when the book starts, and yeah, he's the one who goes on the big emotional journey in this book, between his issues and falling in love!

Like the synopsis says, this couple does need another book to find their happy ending. Where this book ends, with a big decision, well, there's going to be fall out from that decision, and I can't wait to see what's going to happen!

One thing that I really want to know, is what their first meeting actually was! That she remembered it and he didn't, and how that caused their next meeting, the first in this book, to have more hostility then it otherwise would have. I feel like it's important, and I hope I'm right!

This book was so fantastic, and I need to read the next book!