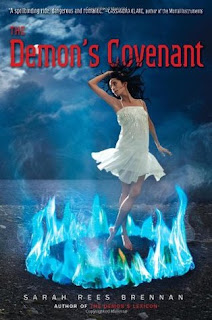 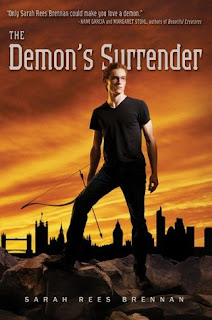 From Goodreads:
Sixteen-year-old Nick and his brother, Alan, are always ready to run. Their father is dead, and their mother is crazy—she screams if Nick gets near her. She's no help in protecting any of them from the deadly magicians who use demons to work their magic. The magicians want a charm that Nick's mother stole—and they want it badly enough to kill. Alan is Nick's partner in demon slaying and the only person he trusts in the world. So things get very scary and very complicated when Nick begins to suspect that everything Alan has told him about their father, their mother, their past, and what they are doing is a complete lie. . .

From Goodreads:
Mae Crawford's always thought of herself as in control, but in the last few weeks her life has changed. Her younger brother, Jamie, suddenly has magical powers, and she's even more unsettled when she realizes that Gerald, the new leader of the Obsidian Circle, is trying to persuade Jamie to join the magicians. Even worse? Jamie hasn't told Mae a thing about any of it. Mae turns to brothers Nick and Alan to help her rescue Jamie, but they are in danger from Gerald themselves because he wants to steal Nick's powers. Will Mae be able to find a way to save everyone she cares about from the power-hungry magician's carefully laid trap?

From Goodreads:
The Goblin Market has always been the center of Sin’s world. But now the Market is at war with the magicians, and Sin’s place is in danger. Thrown out of the Market she loves, Sin is thrown together with brothers Nick and Alan—whom she's always despised.

Alan has been marked by a magician and is being tortured so that the magicians can get to Nick. As Sin watches Alan struggle to protect the demon brother he loves, she begins to see him in a new light—but she and Mae are locked in a fierce rivalry over who will inherit the leadership of the Goblin Market, and a decisive battle with the Aventurine Circle is looming. Mae's brother, Jamie, is holed up with the magicians, his loyalties in question. And Nick—well, who knows what a demon might do to save his brother? How far will Nick go to save Alan—and what will it cost them all?

My first review of The Demon's Lexicon, The Demon's Covenant, The Demon's Surrender
My Review:
Oh, I loved reading these books again! It's been so long since I first read them! And yeah, it's making me want to read the Lynburn series because I'm wondering if they're set in the same world or not...So I'll have to read that series again to figure it out, yeah!

I forgot most of what happened in these books. I remembered the big twist of The Demon's Lexicon, and that Alan was a liar who had very complex plans and plots. But that was about it. So reading these books again, it was basically like reading them for the first time, which was nice!

These books were very complex and tricky. They were also hilarious, because I can't forget to mention that! So much could go wrong, and sometimes it did, and creative solutions had to be found. But they built something good in the end, with hope for the future. So fantastic!

Loved this series so much, it was so freaking fantastic!