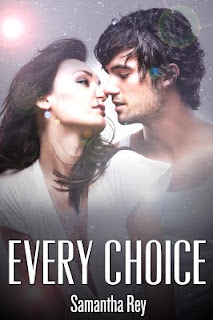 Cassie Whitlock has relived that day countless times in her dreams for the past four years. It left more than just physical scars, it has caused her to close herself off to everyone. She no longer believes in love. Love only ends in pain.

That's why when she meets Luca, she is surprised by the immediate and undeniable attraction between them. She doesn't want complicated and she knows he's about to make everything complicated. As their lives become more intertwined, it becomes harder to hide her secrets, and harder to resist him, but when she discovers he has secrets of his own, she begins to question everything. Cassie has to make a choice: hold on to the ghosts of her past or be brave enough to imagine a future.

My Review:
I enjoyed reading this book. I do wish that I'd read it a bit sooner, or a bit later then I did, because the pain from having my wisdom teeth removed, and everything that came with that, effected my reading experience. Didn't effect how much I enjoyed the book, though!

Yes, their secrets were pretty hard to bear. Who would want to go through things that hurt, even if in the end, it leads to one of the best things in your life? For her, the attack. For him, the lost love. Either way, pain. But then they got each other!

Really fantastic ending, it was rocky there for a bit, but they made it through it, together, once they realized (well, she realized) that they were better together than apart! Really nice to read, and I enjoyed that so much!

Such a fantastic book, and able to read as a stand alone (since I haven't read the first book) and yeah, I enjoyed it a lot!

Bio:
Samantha Rey graduated from the University of Mary Washington in Virginia with a degree in theatre and a Master's in elementary education. While her full-time job is currently teaching third grade just outside of Washington, D.C., her love of theatre, entrancing characters, and never-ending drama has not subsided. She has always loved creating stories and the Every series is culmination of a lot of hard work and following her dreams. When she is not writing, she is reading way too much, choreographing musicals, grading papers, and spending time with her husband and their dog, Paisley. You can follow Samantha on Twitter @authorsamrey, on her website, samantharey.com, or on Facebook, facebook.com/authorsamantharey.