We Have the Cover of Charley Davidson #9!!!!

Another cover! Found because it was in Readers Also Enjoyed, which is such a great part of Goodreads! And yeah, another cover that I'm so excited, I mean, it's The Dirt on the Ninth Grave by Darynda Jones! It's a book to be excited about! 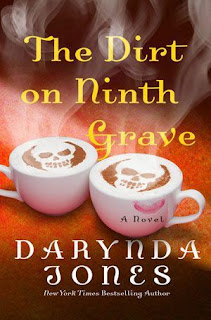 
The wait for January is going to be evil, because that ending of Eighth Grave! And I love the form the skulls are taking for this cover, just awesome! Though how is it going to fit on the spine? What about you guys? Happy reading!
Posted by Louisa @ Words I Write Crazy at 10:11 PM