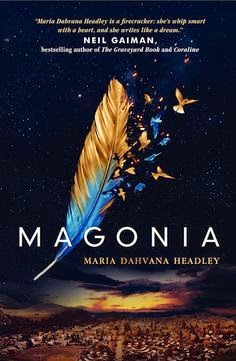 From Goodreads:
Neil Gaiman's Stardust meets John Green's The Fault in Our Stars in this fantasy about a girl caught between two worlds…two races…and two destinies.

Since she was a baby, Aza has suffered from a mysterious lung disease that makes it ever harder for her to breathe, to speak—to live.

So when Aza catches a glimpse of a ship in the sky, her family chalks it up to a cruel side effect of her medication. But Aza doesn't think this is a hallucination. She can hear someone on the ship calling her name.

Only her best friend, Jason, listens. Jason, who's always been there. Jason, for whom she might have more-than-friendly feelings. But before Aza can consider that thrilling idea, something goes terribly wrong. Aza is lost to our world—and found, by another. Magonia.

Above the clouds, in a land of trading ships, Aza is not the weak and dying thing she was. In Magonia, she can breathe for the first time. Better, she has immense power—and as she navigates her new life, she discovers that war is coming. Magonia and Earth are on the cusp of a reckoning. And in Aza's hands lies the fate of the whole of humanity—including the boy who loves her. Where do her loyalties lie?

My Review:
Reading the synopsis, it's only a bit of an introduction, beyond the last paragraph of it, because there's so much more to it then Aza and Jason, just so much more! This world of Magonia, it was so good at giving details that we needed, but not overcrowding everything!

I really enjoyed the narration, of mostly Aza chapters, but some Jason chapters inter-spaced, so we got to see more of what was going on, which was really great. And the way that the characters narrated, individually, yeah, that was pretty awesome

Of all the characters, the ones that we got to know really well, of course, were Aza and Jason. Next level was Dai, and a bit of his life story. Then there was Zal, and Caru, whose stories we kinda got a bit of, as they pertained to the story. So that's one point for yeah for a sequel!

Another point, is the way things left off! If I hadn't checked Goodreads before reading this book, I would've thought it was a stand alone, and that would've been slightly evil, because of the unanswered questions, which most likely will be answered in the sequel, yeah!

Man, this was just a fantastic book, and I can't wait for the sequel!