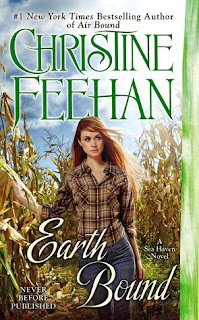 From Goodreads:
The #1 New York Times bestselling author of Air Bound returns to the mysterious coastal town of Sea Haven where six sisters of the heart are bound by the elements, and one is stalked by an inescapable past…

After escaping from a cult, Lexi found refuge with her sisters on the farm that more than sustained her body—it nurtured her soul as well. But she never forgot the terror she left behind or the always present fear that the cult would find her again, and claim her. Then her nightmare came true.

Lexi was discovered and threatened—only to be suddenly saved by a stranger. He is Gavriil Prakenskii, and he's awestruck by the woman he's rescued. She is destined for him. He can feel it in his soul. But how can Lexi find happiness with a man steeped in secrets and shadows, one intimately acquainted with violence, and whose very love could be the death of them?

My Review:
Oh, I enjoyed this book so much! Reading it was much faster then Air Bound, and I think that's because of what Lexi went through, that made me want to read faster so I could get to her happy ending! Plus, her and Gavriil were a pretty great couple!

I didn't catch the first time that Reverend RJ was mentioned, well, Reverend, but not RJ. So I was thinking about it, and that he might be the leader of the cult that did this to Lexi. And then went back and reread the beginning, and caught it, so I was right! Makes me so glad that he met the end that he did in Hidden Currents!

Lexi went through a lot. I kinda wish that Caine had had his ending with a bit more page time, because he did pretty horrible things to her, and I wanted him to suffer a bit more, well, suffer where I could read about it, not after-the-fact mentionings!

That one scene, where Gavriil goes to Ilya's house, that was just so cute! I enjoyed reading that so much, of having the second oldest brother (because we finally got the birth order of he Prakenskii's brothers!) meeting the youngest for the first time since their parents were killed and they were separated! So great! And then of course there was action, which was just so great!

Favourite lines: "'Letting you get to know what an all-around great prize you're getting. I come with an arsenal, two killer dogs and skills on my resume few others can ever claim.' 'You're impossible, do you know that? I'll bet no one else knows you have a sense of humor.' 'It's been such a well-kept secret, so much so, even I didn't know.'" Well, now the both of them know now! Yeah!

Such a great and fantastic book, now I can't wait for Fire Bound, and Blythe's book!