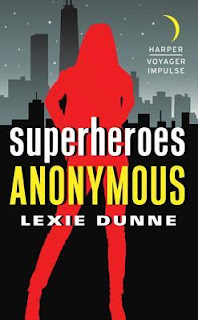 From Goodreads:
Everybody in Chicago has a "superhero sighting" story. So when a villain attacks editorial assistant Gail Godwin and she's rescued by superhero Blaze, it's a great story, and nothing more. Until it happens again. And again.

Now, the media has dubbed her Hostage Girl, nobody remembers her real name, and people are convinced that Blaze is just Gail's boyfriend Jeremy in disguise. Gail's not so sure. All she knows is that when both Jeremy and Blaze leave town in the same week, she's probably doomed. Who will save her now?

But when the villains miraculously lose interest, Gail is able to return to her life…until she wakes up strapped to a metal table by a mad scientist who hasn't read the news. Escaping, and now more than human herself, she's drawn into a secret underground world of superheroes. She'll have to come to terms with her powers (and weakness) to make it in the new society, and it's not easy. After all, there's a new villain on the rise, and she has her sights set on the one and only Hostage Girl.

My Review:
This was such a fantastic book! It was fun, and interesting, and just so easy to read! The pages just flew by, I was just totally submersed in reading this book-I couldn't have enough! And I'm so glad that it's a series, because we get more! Yeah!

So from the synopsis, I knew that this would be a very awesome book. And it delivered that, I just loved reading about Gail, and how people call her Girl, short for Hostage Girl, because they've forgotten her real name. And things she gets into, not fun for her, but so fun to read about!

Her and Guy, that was just so cute and funny! We know/knew that there's something romantic brewing between them, but they didn't really notice it as much themselves, well, we know that Gail didn't, really, can't speak for Gus!

And that ending! Oh, man, that was an evil cliffhanger! And it leaves us with tons of questions. How is she going to deal with being arrested? And some less pressing, but still interesting questions, is she going to be cured of the cancer? And the story about Guy and Sam's sister, we need to learn it!

Yeah, this was such a fantastic, funny, amazing book, and now I just really want to read it (though, by the time this posts, I will have read it, and loved it, I know it, since I have a booked review post of the 2nd book on the 20th!)