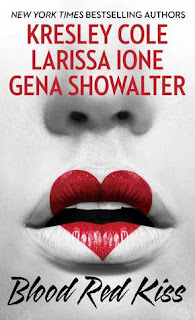 Get ready for a collection chock full of vamps, demons, aliens, and plenty of sizzle!

In Kresley Cole's celebrated story "The Warlord Wants Forever," the first in her scorching Immortals After Dark series, vampire warlord Nikolai Wroth will stop at nothing to claim his Bride, the one woman who can make his heart beat again. But can beautiful Myst the Coveted accept an enemy vampire as her own?

Tehya has spent the last twelve years as an accidental wolf, but is truly a vampire at heart. When she gets injured, Lobo sneaks her inside MoonBound's headquarters and nurses her back to health…with potentially deadly consequences. Desire collides with danger in "Forsaken by Night," a MoonBound Clan novella from Larissa Ione!

In Gena Showalter's Otherworld Assassins novella, Dark Swan, Lilica Swan isn't quite human or otherworlder; she is the best—and worst—of both. She is willing to do whatever proves necessary to save her sister from the seductive and deadly Alien Investigation and Removal agent, Dallas Gutierrez, even bond her life to his…effectively wedding him. But without consummation, the bond will fade. Can Dallas resist his insatiable desire for the powerful beauty? Or will she lead to his ultimate downfall?

My Review:
I loved reading these stories! I love these authors, and these series, and yeah, this was a great anthology! While I have read The Warlord Wants Forever before, it was great to read it again, and with two new stories!

Honestly, it's been a while since I first read The Warlord Wants Forever. So while I know it was updated and polished, I really couldn't tell where, because I can't remember what it was like before! But it was so awesome to read it!

Forsaken by Night, was just fantastic! Lobo was briefly mentioned in Chained, and yeah, his and Tehya's story was so awesome! There was some more setting up for future books, with one baddie dealt with, and another still around, unknown!

The one I was most anticipating, was Dark Swan-it's the one that I've been waiting for the longest (because I just read the MoonBound Clan Vampires last week) and yeah, it didn't disappoint! Dallas and Lilica's book was just fantastic, we learned more, and there was set up for John No Last Name's book! I can't wait for it, I hope we might get it soon!

Absolutely loved this anthology, it has some fantastic stories, and I can't wait to read more of these series!