Week 39 Review: How to Save the World 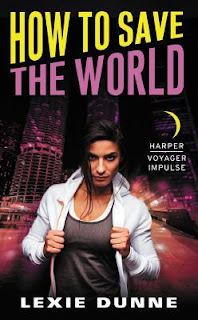 From Goodreads:
In the third book of Lexie Dunne's action-packed Superheroes Anonymous series, Hostage Girl returns once again to save the world.

Gail Godwin—once so famous for being kidnapped by supervillains, the media still calls her Hostage Girl—is done with superheroes and their shadowy schemes. She's got a cute boyfriend, a great roommate, and she's even returned to her old job. For the first time in years, life is exactly what she wants it to be.

But when a figure from her past resurfaces, he brings with him a plague that changes the game for every superhero and villain out there. Now Gail must team up with both friend and foe to help save the world she thought she had left behind.

My Review:
I just loved reading this book! I devoured it, and it was just fantastic! I've loved this series from the beginning, and this book was no different! Gail was just as quick with the snappy retorts, and a life that just doesn't let up with the bumps on the road! Loved it!

There were periods with a lot of action, and then there was the waiting game for Gail in this book. She either didn't get really any breathing room, or she had too much of it. And while she's used to that from her Hostage Girl days, now that she's on the superheros side of it all, yeah.

I really enjoyed the developments in this book! Like learning the purpose of the powers that Gail has. And the game changer in the super world. I also really enjoyed Guy's story arc in this story, it wasn't what I expected, though I think I should have, but yeah, really enjoyed it!

I really hope that there's a 4th book. There's Jeremy and the ending of this book. And then there's Petra, and the search for her. There's probably more, like I had no idea, after reading Supervillians Anonymous that this book could happen, so yeah, there's that!

Loved reading this book so much, it was just so great, and I really hope we get a book 4!