Week 39 Reviews: The Lady is a Vamp, Immortal Ever After 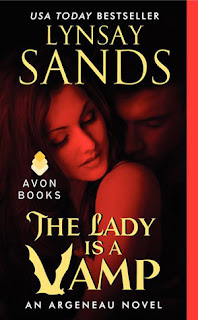 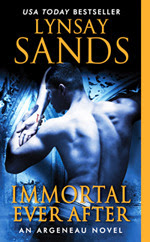 From Goodreads:
New York Times bestselling author Lynsay Sands, one of paranormal romance's original superstars, delivers a scorching and delightful story of a mortal man on a mission—and the Vamp who is his only hope.

Kidnapped! When Jeanne Louise Argeneau left work, she never thought she'd end up tied down by a good-looking mortal. More attracted than annoyed, she quickly realizes there is more to her abductor than meets the eye.


Love? Paul Jones has need of a vampire, and only Jeanne Louise will do. He just has to convince this beauty of a Vamp to help him . . . never imagining that he would fall in love. But with the immortal world's answer to law enforcement hunting them, their time together is running out . . . and Paul and Jeanne Louise will need to risk everything to spend an eternity together

Valerie Moyer doesn't believe in vampires—until she is kidnapped by a fanged psychopath! After escaping her bloodthirsty captor, she’s through with creatures of the night. Until she finds herself under the protection of the darkly handsome Anders. Not only is she expected to accept that Anders is immortal, but also that she is the woman destined to be his life mate!

Anders felt a connection to Valerie from the moment he cradled her bruised body in his arms. But before he claims her, he must destroy the vampire who almost stole her from him forever. His job would be easier if Valerie didn't fight him every step of the way. Still, Anders loves a challenge, and the green-eyed beauty is worth fighting for!

My Review:
Yeah, some really fantastic additions to this series! They are everything a Lynsay Sands book should be, hilariousness and romance, and just so enjoyable! She's one of my favourite authors now, and I can't wait to read more of her books!

Lady was just fantastic! I read the first chapter in the back of Under a Vampire Moon, but yeah, I held off on reading it till this week, because I'm crazy, because this book was just so sweet and fantastic! I loved how everything worked out, because it did!

Immortal, that was hilarious, how Valerie helped Leigh give birth! There was the bad guy, and they were kinda kidnapped, and they saved their selves, but she was giving birth! That was just hilarious, and I really enjoyed reading that!

One thing that I'm confused about in Immortal, is the painting. If the guy was turned during a world war, then wouldn't he have been too young to have a painting done, since I don't think they were all that common after photographs came about? Yeah.

Loved reading these books, they were so fantastic, and I can't wait to read more of this series-I've almost caught up to what's been currently published, yeah!

The Lady is a Vamp: