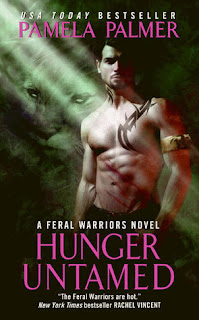 From Goodreads:
They are called Feral Warriors;an elite band of immortals who can change shape at will. Sworn to rid the world of evil, consumed by sorcery and seduction, their wild natures are primed for release . . .

For a thousand years she has haunted him; Ariana, Queen of the linas, a beauty of mist and light. His love, his life mate. Kougar believed her lost to him forever, until the truth of her stunning betrayal left him bitter and hungry for revenge. Now she alone holds the power to save two trapped and desperate Feral Warriors.

Ariana, caught in a deadly battle of her own, is neither the soulless creature Kougar believes her to be nor the savior he seeks.And when darkness threatens to annihilate both races, the greatest danger of all becomes the glorious love Kougar and Ariana once shared. A love that must never rise again. A love that has never died.

My Review:
Loved reading this book! It was another fantastic installment in this series so awesome, and it was set up in Rapture Untamed, what with Tighe and Hawke in the spirit trap, and everything that happened there with Kougar! So yeah, really fantastic book! So awesome!

This was the book were we learned more about how the races contained Satanan and his followers-because Kougar was there. He was young then, but he was the one that received the cougar spirit after it all. He's the only one that has had it since the powers went from clans to one single person, hopefully. Yeah. That was pretty big!

I really enjoyed Kougar and Ariana's relationship. They had 2 years together previously. But that wasn't at the same depth that it was here. And I loved reading about how things grew deeper and deeper, even though it meant more risk to the both of them!

Loved how everything worked out, her memories, and how her race works, and how the bad guy was truly devious, but that they were able to use that against him! And that they could free Tighe and Hawke so the former could be alive to meet his child!

This book set up for Hawke's book, and I can't wait to read it, it sounds awesome!