Week 39 Review: Sins of the Demon 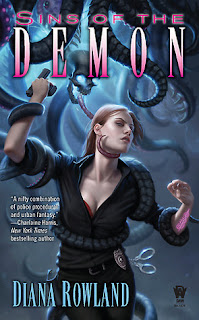 From Goodreads:
Louisiana homicide detective Kara Gillian is doing her best to cope with everything that's happened to her over the past year, all while s continuing to hone her skills as a demon summoner. But lately she's beginning to wonder if there's a little too much demon in her world. She has a demon for a roommate, the demonic lord Rhyzkahl is still interested in her for reasons she can't fathom, and now someone in the demon realm is trying to summon her. And there's no way that can end well.

Meanwhile, people who've hurt Kara in the past are dropping dead. Kara is desperate to find the reasons for the deaths to clear her own name, but when she realizes there's an arcane pattern to the deaths, she knows that both the human and the demon worlds may be at risk unless she finds out who's behind it all. She's in a race against the clock and in a battle for her life that just may take her to hell and back.

My Review:
Loved reading this book! This series has been really fantastic, and I can't wait to read more! There was quite a bit going on in this book-the people dying, Rhyzkahl and his strange ways, Ryan actually being the Demon Lord that her grandmother was trying to summon...yeah. A lot going on!

This was the book where we learned more about Kara's past. She's mentioned bits and pieces, but this was more in depth, that it was connected to what was going on now...yeah. That just added some layers to this story! Loved it!

That ending was just pure evil! Between who the bad guys were (because that kinda hurt!) the mention that her dad shouldn't have died in the accident, and what it meant-that she would be summoned because she had to save their world...yeah. And that last scene, just an evil cliffhanger!

One last thing that was going on, and that ended with a cliffhanger, is those dreams that Kara was having, that might have been memories, of the demon's world, of a place that seemed familiar. And yeah, I'm kinda wondering if she's the one that was stolen from Rhyzhakl and destroyed, as was mentioned. Because that would be interesting!

Loved this book, and I can't read Touch of the Demon soon enough!