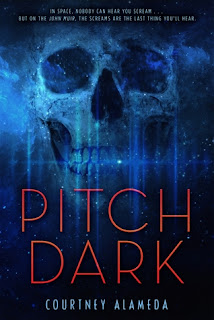 From Goodreads:
Set against a future of marauding space scavengers and deadly aliens who kill with sound, here is a frightening, fast-paced YA adventure from the author of the acclaimed horror novel, Shutter.

Tuck has been in stasis on the USS John Muir, a ship that houses Earth's most valued artifacts—its natural resources. Parks and mountains are preserved in space.

Laura belongs to a shipraiding family, who are funded by a group used to getting what they want. And they want what's on the Muir.

Tuck and Laura didn't bargain on working together, or battling mutant aliens who use sound to kill. But their plan is the only hope for their crews, their families, and themselves.

In space, nobody can hear you scream . . . but on the John Muir, the screams are the last thing you'll hear.

My Review:
I wasn't expecting to read this book. I had so many other books to read, but then I saw something about this book, and I just had to read it! And I'm so glad that I did, because it just blew me away! This book had everything going for it, characters to root for, a terrifying and thrilling danger, and so much more! It was just so great to read!

The idea that humanity damaged Earth so much they had to leave, and they did so carrying pieces of Earth, that was incredible that they were able to do so, but sad that they had to. And that they were sabotaged and scattered by a terrorist group who didn't want humanity to continue, not cool. And when the John Muir centuries later, more stabatoge ensues!

That Laura was basically enslaved by her ex and his mom, that was horrible. They knew what they were doing was illegal, and they didn't care. It was attitudes like that that ruined their world. I loved how she found a work-around, but she didn't get to use it, which sucked, and it made her look like the bad guy!

There were so many things that added up to make this a really fantastic book! Like how the monsters that tracked by sound were created. Why the piece of Earth on the John Muir was necessary for humanity's survival. That moment when her ex said why should they believe you when my family is so important? And Tuck thought, my mom's even more important and you don't even know! That was an awesome moment! The twist of who was the terrorist bad guy! That hurt, but it made for a great story!

I loved reading this book and I kinda wish we could have a sequel, just because this world was so original and great!