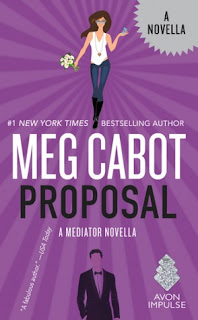 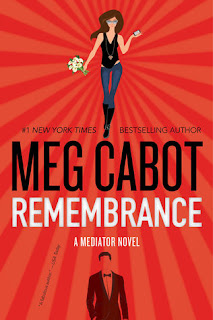 From Goodreads:
The last place Suze Simon expects to find herself during Valentine's Day is a cemetery. But that's what happens when you're a mediator – cursed with the "gift" of communicating with the dead.

That's how Suze has ended up at the graves of a pair of NCDPs - Non-Compliant Deceased Persons – whose drama didn’t end with death. It's Suze's job to make sure they move on—for good.

But the NCDPs aren't the only ones with problems. The reason Suze is spending her Valentine's Day with the undead instead of her boyfriend, Jesse, is because he's having so much trouble adjusting to life after death . . . not surprising, considering the fact that he used to be an NCDP himself, and now his girlfriend busts his former kind for a living, while he tries to cure his kind of what used to ail him.

Can Suze use her mediating skills to propose a mutual resolution, and bring all these young lovers together - including Jesse and herself - especially on the night Saint Valentine declared sacred to romance?

Or will she end up alone—and possibly undead—herself?

From Goodreads:
Fifteen years after the release of the first Mediator novel, #1 New York Times bestselling author Meg Cabot returns with a deliciously sexy new entry to a fan-favorite series. Suze Simon—all grown up and engaged to her once-ghostly soulmate—faces a vengeful spirit and an old enemy bent on ending Suze's wedded bliss before it begins.

You can take the boy out of the darkness.

But you can't take the darkness out of the boy.

All Susannah Simon wants is to make a good impression at her first job since graduating from college (and since becoming engaged to Dr. Jesse de Silva).

But when she's hired as a guidance counselor at her alma mater, she stumbles across a decade-old murder, and soon ancient history isn't all that's coming back to haunt her. Old ghosts as well as new ones are coming out of the woodwork, some to test her, some to vex her, and it isn't only because she's a mediator, gifted with second sight.

From a sophomore haunted by the murderous specter of a child, to ghosts of a very different kind—including Paul Slater, Suze's ex, who shows up to make a bargain Suze is certain must have come from the Devil himself—Suze isn't sure she'll make it through the semester, let alone to her wedding night.

Suze is used to striking first and asking questions later. But what happens when ghosts from her past—including one she found nearly impossible to resist—strike first?

What happens when old ghosts come back to haunt you?

If you're a mediator, you might have to kick a little ass.

My Review:
Yeah, I loved reading these! It's the first time I'd read Proposal, but the 2nd time I'd read Remembrance. And yeah, it was great to read them back to back, because yeah, the proposal that happens in the former is why they're engaged in the later. They just go so well together!

I loved the case in the first one, of a ghost disrupting a grave that belonged to his girlfriend because they think he killed her. Which is not cool! That there was more to the story, and on Valentine's Day, no less, made for such a great read!

The whole idea that Jesse would become a demon or something because the house where he was killed was destroyed is a little out of there, even for this series. I didn't even think that I would happen, but yeah, Suze is in love with him and that's a good reason to be totally irrational about your loved ones well being!

I really enjoyed how everything turned out, with the house, with the wedding, and with the guests and loose ends there were! I wouldn't mind another book in this series, but it doesn't have to happen, Remembrance has a great ending!

This series was so great and I just loved reading these books!