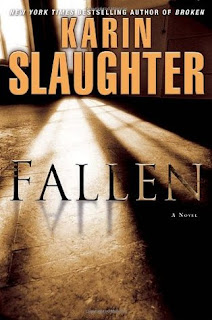 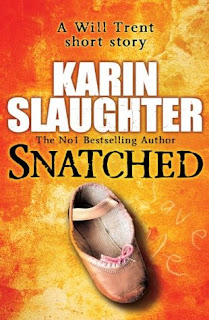 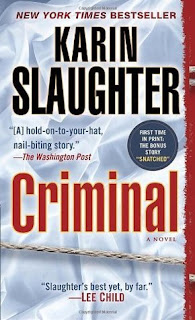 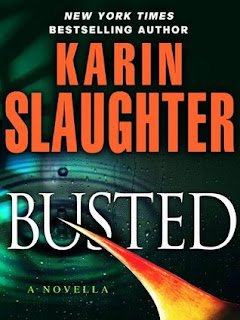 From Goodreads:
There's no police training stronger than a cop's instinct. Faith Mitchell’s mother isn't answering her phone. Her front door is open. There's a bloodstain above the knob. Her infant daughter is hidden in a shed behind the house. All that the Georgia Bureau of Investigations taught Faith Mitchell goes out the window when she charges into her mother's house, gun drawn. She sees a man dead in the laundry room. She sees a hostage situation in the bedroom. What she doesn't see is her mother. . . .

"You know what we're here for. Hand it over, and we'll let her go."

When the hostage situation turns deadly, Faith is left with too many questions, not enough answers. To find her mother, she'll need the help of her partner, Will Trent, and they'll both need the help of trauma doctor Sara Linton. But Faith isn't just a cop anymore—she's a witness. She's also a suspect.

The thin blue line hides police corruption, bribery, even murder. Faith will have to go up against the people she respects the most in order to find her mother and bring the truth to light—or bury it forever.

Karin Slaughter's most exhilarating novel yet is a thrilling journey through the heart and soul, where the personal and the criminal collide, and conflicted loyalties threaten to destroy reputations and ruin lives. It is the work of a master of the thriller at the top of her game, and a whirlwind of unrelenting suspense.

Will Trent, a dedicated agent with the Georgia Bureau of Investigation for fifteen years, knows that there's definitely such a thing as a cop's intuition. Which is why he should have listened to his own.
While in an airport restroom at Atlanta's Hartsfield-Jackson International, Will overhears a girl's pleading, plaintive voice: "Please, I wanna go home." Something isn't right here, thinks Will. He feels it in his gut. But he waits too long to act, and now the girl and the anxious, angry man she's with have disappeared into the crowds at the busiest passenger airport in the world.
After a desperate search and with time running out, Will makes a call to his supervisor, Amanda Wagner. Will’s partner, Faith Mitchell, immediately sends out an abducted child alert. The entire airport will soon be grinding to a halt: Almost 100 million passengers a year. Five runways. Seven concourses. Six million square feet of space that sprawled across two counties, three cities, and five jurisdictions. All shut down on a dime because Will has a hunch that he is certain is true: a girl, maybe six or seven years old, has been snatched from God knows where. And he intends to bring her back—no matter what it takes.

From Goodreads:
Will Trent is a brilliant agent with the Georgia Bureau of Investigation. Newly in love, he is beginning to put a difficult past behind him. Then a local college student goes missing, and Will is inexplicably kept off the case by his supervisor and mentor, deputy director Amanda Wagner. Will cannot fathom Amanda's motivation until the two of them literally collide in an abandoned orphanage they have both been drawn to for different reasons. Decades before—when Will's father was imprisoned for murder—this was his home. . . .

Flash back nearly forty years. In the summer Will Trent was born, Amanda Wagner is going to college, making Sunday dinners for her father, taking her first steps in the boys' club that is the Atlanta Police Department. One of her first cases is to investigate a brutal crime in one of the city's worst neighborhoods. Amanda and her partner, Evelyn, are the only ones who seem to care if an arrest is ever made.

Now the case that launched Amanda's career has suddenly come back to life, intertwined with the long-held mystery of Will's birth and parentage. And these two dauntless investigators will each need to face down demons from the past if they are to prevent an even greater terror from being unleashed.

From Goodreads:
From Karin Slaughter comes a fast and furious tale in which no one is quite who they seem. This electrifying eBook novella featuring Will Trent is a prequel to Slaughter's upcoming novel, Unseen.

Detective Will Trent is standing in a Georgia convenience store, waiting on an obstinate Icee frozen drink machine. To the surveillance cameras and bored staff of the Lil' Dixie Gas-n-Go, however, Will appears to be someone very different—the menacing ex-con Bill Black. Going undercover as Bill, the Georgia Bureau of Investigation agent is about to infiltrate the most corrupt town in the most corrupt county in the new American South. But first: his Icee.

Everything changes in one horrific instant, as all hell breaks loose at the Lil' Dixie. A cop is shot. A bag of cash goes flying across the floor. A young woman disappears while a killer takes off in a battered pick-up truck. Within seconds, Will is in pursuit.

I had forgotten the big twist of Fallen, who the bad guy was and why he wad doing what he was doing! So yeah, the investigation, the hints and clues, I didn't get it, but then it was revealed and that was just a huge twist!

The short stories, they both had their awesome points! Like how in both of these stories, they used the bad guys overconfidence and their ideas about the law against them! In Snatched, by holding him and changing the clock and that they wouldn't charge him, but the counties that he'd traveled in, would.

In Busted which had so many twists and turns and tricks, they couldn't charge her with the big things, but with lying to the police, multiple times, and since she was elderly, she'd most likely die in prison, and she deserved it, what she did to her family! I did feel slightly sorry for her, that her son put up her house as collateral and was failing. But other than that, she was awful and deserved what she got!

Criminal was so great to read again! I loved how it was told, of the present and something happening, going back in time to Amanda's first case, and how hard women had to fight to be treated less than. I loved how all the ladies that helped Amanda both with catching the bad guy, Will's dad, but also to help Will as he strayed sometimes from the path, and also, presumably, to catch the other bad guy, Will's uncle, with the "archival" evidence! Loved it!

These books were so great, and now I've finally caught up with what I'd previous read, and now onto new books in the series for me! Yeah!