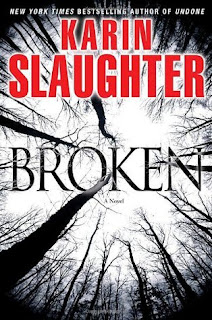 From Goodreads:
When Special Agent Will Trent arrives in Grant County, he finds a police department determined to protect its own. Officer Lena Adams is hiding secrets from him, and while her role in the death of the county's popular police chief is unclear, that man's widow, Dr. Sara Linton, desperately needs Trent's help to crack the case of a prisoner's death. While the police force investigates the murder of a young woman pulled from a frigid lake, Trent investigates the police force.

Caught between two complicated and determined women, trying to understand the facts surrounding Chief Tolliver's death, Trent will uncover explosive secrets—and confront a thin blue line that could be murderous if crossed.

My Review:
I loved this book! It's the one where Will's in Sara's hometown and assumptions are made about them being together. Faith doesn't really have a role in this book, because of the baby she gives birth to in this book, so it was mainly Will and Sara!

We were in Lena's head, from dealing with the body, to big events in Brad being stabbed. Which was a big part of this book, the case that brought Will in to investigate-that the suspect killed himself. That Lena confesses but Will doesn't get it written down or have it officially, so when Frank comes clean, she gets away with it. Bah!

I felt really bad for Sara, that her cousin was running a drug trial out of her building, that sucked! Especially since the consequences were so high! And that he would continue to do so, even though the whole system is basically rotten, sucks!

Frank was always somewhat of a middle of the road of a character. On the one hand, he was a cop. On the other, he was pretty lazy and had bad habits, and carried an attitude with bad "ism's." But how he acted in this book was totally over the top, so I'm glad that he had that big reason, because it makes sense, but the fact remains that he did the wrong things in this situation!

This book was so fantastic, and I'm so glad that I'm rereading this series, because it's all so freaking amazing!