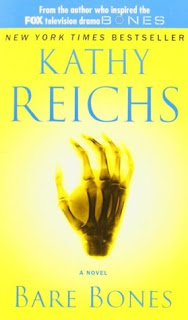 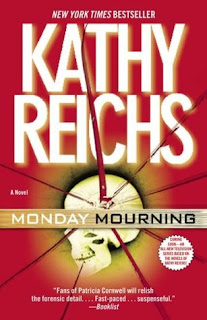 From Goodreads:
It's a summer of sizzling heat in Charlotte where Dr. Temperance Brennan, forensic anthropologist for the North Carolina medical examiner, looks forward to her first vacation in years. A romantic vacation. She's almost out the door when the bones start appearing.

A newborn's charred remains turn up in a woodstove. A small plane crashes in a North Carolina cornfield on a sunny afternoon. Both pilot and passenger are burned beyond recognition. And what is the mysterious black substance covering the bodies? Most puzzling of all are the bones discovered at a remote farm outside Charlotte. The remains seem to be of animal origin, but Tempe is shocked when she gets them to her lab.

With help from a special detective friend, Tempe must investigate a poignant and terrifying case that comes at the worst possible moment. Daughter Katy has a new boyfriend who Tempe fears may have something to hide. And important personal decisions face Tempe. Is it time for emotional commitment? Will she have the chance to find out?

Everything must wait on the bones. Why are the X rays and DNA so perplexing? Who is trying to keep Tempe from the answers? Someone is following her and Katy. That someone must be stopped before it's too late.

From Goodreads
The bones of three young women are unearthed in the basement of a Montreal pizza parlor, and forensic anthropologist Tempe Brennan has unsolved murder on her mind as she examines the shallowly buried remains. Coming up against a homicide cop who is convinced the dead have been entombed on the site for centuries, Tempe perseveres, even with her own relationship with Detective Andrew Ryan at a delicate turning point. In the lab, the clean, well-preserved bones offer few clues. But when Carbon 14 confirms her hunch that these were recent deaths despite the antique buttons found near the bodies, Tempe's probing must produce answers quickly to stop a killer whose grisly handiwork has seen the light of day.

My Review:
I was only meaning to be reading one book in this series a week, but since I didn't read Bane Bones last week, I felt I had to read both of these this week. That's just the weird way my mind works sometimes, but not always. Because yeah, I'm weird, and this so far has had little to do with the books themselves!

Bare Bones was so great, in that it solves the bit of a cliffhanger in Grave Secrets in whom Tempe chose as a romantic partner, even if things didn't go as planned. And yeah, it was just absolutely fantastic seeing her and Ryan together! After 6 books, we're more invested in them as a couple instead of the guy she just met in Grave Secrets!

Bare Bones was also the book where we really met her daughter, Katy, even if it wasn't much, and the fear that Katy might be in danger. And it's also the one where she finally starts a romantic relationship with Ryan, even if it gets tossed around in Monday Mourning!

Monday Mourning was really great, in that it was back in Montreal, and Ryan's acting weird and withdrawn. Plus the case with the bones buried under a pizza shop that her kinda-nemesis wants to think are at least 50 years old and doesn't want to investigate! Really annoying, but she proved him wrong!

Loved reading these books and I can't wait to read more!