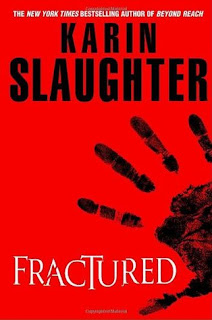 From Goodreads:
With its gracious homes and tree-lined streets, Ansley Park is one of Atlanta's most desirable neighborhoods. But in one gleaming mansion, in a teenager's lavish bedroom, a girl has been savagely murdered. And in the hallway, her horrified mother stands amid shattered glass, having killed her daughter's attacker with her bare hands.

Detective Will Trent of the Georgia Bureau of Investigation is here only to do a political favor; the murder site belongs to the Atlanta police. But Trent soon sees something that the cops are missing, something in the trail of blood, in a matrix of forensic evidence, and in the eyes of the shell-shocked mother. Within minutes, Trent is taking over the case -- and adding another one to it. He is sure that another teenage girl is missing, and that a killer is on the loose.

Armed with only fleeting clues, teamed with a female cop who has her own personal reasons for hating him, Trent has enemies all around him -- and a gnawing feeling that this case, which started in the best of homes, is cutting quick and deep through the ruins of perfect lives broken wide-open: where human demons emerge with a vengeance.

My Review:
I loved reading this book again! Loved seeing more Will and learning about his past, and that it introduces Faith, who becomes his partner! There was a lot of fantastic developments in this book and it was so great to read!

This mystery was so fantastic! That the mom killed her daughter's boyfriend, thinking that he was her killer, when he thought the mom was his salvation, kind of, yeah, that was painful! And then trying to figure out what happened so they could rescue the kidnapped girl!

Who the bad guy was, that was just worked so well! What he'd done to the kids under his care, that was just awful! I loved that they used his arrogance against him, that they got him to confess when he thought he couldn't be charged-but that since he was a teacher, he was a stand in for a parent so he could still be charged! That was fantastic!

That ending was hard to read. They'd gotten their daughter back, but after what she endured, she wasn't the same, and they weren't, either. But they're all alive and healing, even if things will never be the same again. It was a satisfying ending!

This book was so fantastic, and I can't wait to reread more of this series!