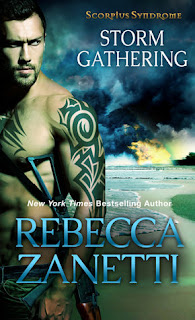 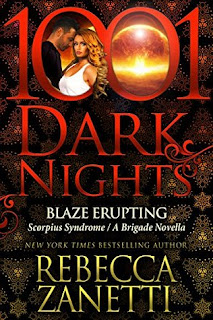 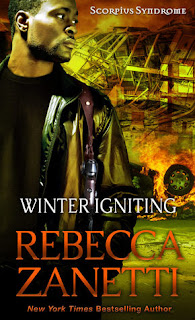 From Goodreads:
Even before surviving the Scorpius bacterium, Greyson Storm was a lone wolf navigating minefields. As a kid, he learned to take a hit and find safety. As an adult, he joined the military and quickly learned how to protect and defend. When the world ended, he created a mercenary camp with military precision, no entanglements, and a promise to avenge a fallen friend. As part of that vow, he kidnapped Maureen Shadow, but now that he has let her go, her blue eyes and intriguing mind keep haunting him…

As possibly the only Biotechnology Engineer still living, Maureen Shadow might be humanity's one hope to survive the aftermath of Scorpius, making her frighteningly valuable to both allies and enemies. Even after sexual tension explodes with Greyson, she's not sure which camp he belongs to—friend or foe? Worse yet, survival may mean thwarting his prime mission, putting her in even more peril. When danger and seduction collide, there is no safety in this new world.

Hugh Johnson is nobody's hero, and the idea of being in the limelight makes him want to growl. He takes care of his brothers, does his job, and enjoys a mellow evening hanging with his hound dog and watching the sports channel. So when sweet and sexy Ellie Smithers from his college chemistry class asks him to save millions of people from a nuclear meltdown, he doggedly steps forward while telling himself that the world hasn't changed and he can go back to his relaxing life. One look at Ellie and excitement doesn't seem so bad.

Eleanor Smithers knows that the Scorpius bacteria has and will change life as we know it, but that's a concern for another day. She's been hand-picked as the computer guru for The Brigade, which is the USA's first line of defense against all things Scorpius, including homegrown terrorists who've just been waiting for a chance to strike. Their target is a nuclear power plant in the east, and the only person who can help her is Hugh, the sexy, laconic, dangerous man she had a crush on so long ago.

From Goodreads:
His only goal was survival until he met her...

With nothing to lose, former cop Damon Winter agrees to an undercover op, infiltrating a cult in the dangerous post-Scorpius world. After one look at his new partner, he knows she belongs far away from not only the cult, but from him. She's sweet and kind and has no business being in peril, but she's determined to help. Suddenly, the part he's playing as her man explodes into a passion neither of them had expected.

She hadn't purposefully faced risk until she met him...

April Snyder has survived loss, pain, and uncertainty. Now she's ready to live again. There's nothing left but to make a difference for others, so why not go undercover in the cult? Now all she has to do is keep it professional and ignore her handsome, deadly, overbearing partner, who's too sexy for her peace of mind. Intrigue, risk, and danger make for an irresistible temptation--until enemies close in, threatening everyone they've sworn to protect.

My Review:
I loved reading these books! Blaze Erupting was interesting because it's only the 2nd story to take place while Scorpius was just getting out, and then Storm Gathering and Winter Igniting deal are both well into Scorpius. I really enjoyed that back and forth!

Yeah that we got Maureen and Greyson's story! With her specialty, she's got a pretty important role-food is very important! And Greyson's the leader of the Mercs. I loved their relationship, which kinda happened even though neither of them wanted it! So much happened in the book like the conflict with the President, and the new bunker, and Zack! Loved it!

Blaze Erupting, well, we got a great look at the Brigade, what they were doing during the beginning of Scorpius, with things like power plants being understaffed and all the problems happening because of that! I loved their romance, and the is he/isn't he a bad guy? It was a great story!

Winter Igniting is the first book where neither of the romantic partners have Scorpius. Given that they have to investigate the compound within the compound, that's a good thing! And it was so interesting to read, how that worked. And of course, the president is more of pain in the butt!

I loved reading these books, and I'm so excited to read more, to have Jax Mercury's brother, Marcus and Penny's story next!