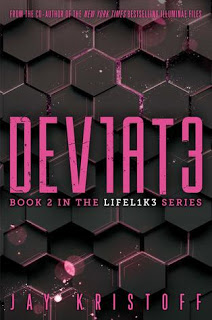 After the climactic battle in Babel, she finds herself separated from Ezekiel and Cricket in the wastelands. Lemon's abilities to manipulate electricity mark her as a deviate, and deadly corporate operatives are hunting her to use as a weapon in the war between BioMaas Incorporated and Daedelus Technologies. Instead, Lemon finds herself falling in with a group of fellow deviates—a band of teenagers with astonishing abilities, led by an enigmatic figure known as the Major, who may hold the secrets to Lemon's past.

My Review:
Wow, this book was so fantastic! It was a really great sequel, and I enjoyed being in Lemon and Cricket's heads! It sucked that the gang wasn't together, but they went on many different adventures, some that started to come together at the end of this book! Can't wait to see where things go from here!

Lemon narrated a lot more in this book, I think she and Eve switched places, because Eve only had a few scenes. But neither of them was sitting around. I kinda thought something was off in the military installment, but I didn't see it coming,. You got me again, Jay Kristoff, again in this series!

I meant to read this book when it came out. And I started it, but then I stalled. Because there was this line, that if Ezekiel had gone a little further, seen Lemon's message, then this all wouldn't have happened. I assume that means that things would've been better. Like, Ezekiel wouldn't have teamed up with Preacher, and all that wouldn't have happened. And that pushed one of my buttons, and slowed my reading of this book to a crawl. I finally got over the tipping point, and devoured this book like it deserved, because it's so freaking great!

That was an evil, killer ending! Like, everybody is not in a good situation, or the last time we left them, they might not have survived, and we don't know. We can hope, and reason that they did, but until the 3rd book, we won't know. And I need to know!

Loved this book, it was such a fantastic read, and I'm dying for the 3rd book!