Week 35 Review: The Upside of Falling 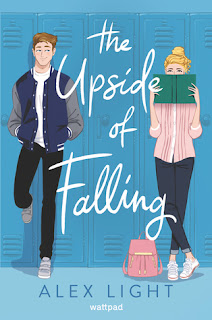 From Goodreads:
It's been years since seventeen-year-old Becca Hart believed in true love. But when her former best friend teases her for not having a boyfriend, Becca impulsively pretends she's been secretly seeing someone.

Brett Wells has it all. Being captain of the football team and one of the most popular guys in school, he should have no problem finding someone to date, but he's always been more focused on his future than who to bring to prom. When he overhears Becca's lie, Brett decides to step in and be her mystery guy. It's the perfect solution: he gets people off his back for not dating and she can keep up the ruse.

Acting like the perfect couple isn't easy though, especially when you barely know the other person. But with Becca still picking up the pieces from when her world was blown apart years ago and Brett just barely holding his together now, they begin to realize they have more in common than they ever could have imagined. When the line between real and pretend begins to blur, they are forced to answer the question: is this fake romance the realest thing in either of their lives?

My Review:
This book was a lot of fun to read! And it was such a quiet read, as well! I really enjoyed this fake dating story, how they grew to be friends, and then to be more! I really enjoyed their relationship! It was a really sweet story! And of course, there's a bunch of delicious baked goods from her mom!

Both Becca and Brett have their reasons why they want to enter into this fake relationship. Becca so she won't be tormented by her ex friend anymore. Brett, so that his parents think that he's taking his time to enjoy high school before his football career takes off in college. Two different kind of pressures, but both significant ones!

On one hand, Becca had parents who divorced when she was younger, and while her dad has moved on and started a new family, her mom started a baking shop. On the other, Brett had a seemingly perfect family. It's a book, and there has to be conflict!

Near the end, with the fake/real debate about their relationship and all the rest of the drama, I understood why they were doing what they were doing. I just wish that they hadn't been so destructive with themselves and with others. It did open them both up, which was a good thing, but it wasn't an easy time!

Really enjoyed reading this book, it was such a fantastic read!