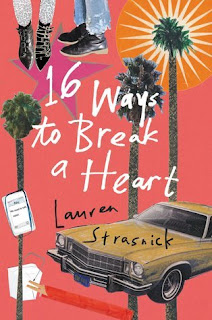 Natalie and Dan were electric from the moment they met. Witty banter and sizzling chemistry made falling in love easy—even inevitable. He was in awe of her subversive art and contagious zest for life; she was drawn to his good-guy charm and drive to succeed as a documentary filmmaker.

But that was before. Before hot tempers turned to blowout fights. Before a few little lies turned to broken trust. Before a hundred tiny slights broke them open and exposed the ugly truth of their relationship.

And now Natalie wants Dan to know just how much he broke her.

Over the course of one fateful day, Dan reads sixteen letters that Natalie has secretly, brilliantly hidden in places only he will find. And as he pieces together her version of their love story, he realizes that she has one final message for him. One that might just send his carefully constructed life tumbling down.

My Review:
This book was a great read. I didn't always like or agree with these characters, but this was a contemporary without any life or death situations. It's about a broken relationship, so I didn't have to like these characters. I didn't need to to enjoy this book! I did have some confusion on the whole timeline, though.

In the beginning, I didn't know who to believe. I mean, like the synopsis said, it's a he said/she said story. She was over the top and he was an admitted cheater. In the end, I think they were both to blame for the breaking down of their relationship. They both just weren't good for each other.

The ending wasn't explosive. It was quieter than that. And I don't mean that it was a disappointment, it feels satisfying, though a bit hollow. Like, there was so much energy put into this relationship and this revenge, and then it was over. I don't know if I'm describing it right. It was different but really great to read!

This book was a really enjoyable read, and I'm glad that did read it!