Week 34 Reviews: A Study in Death, A Pressing Engagement 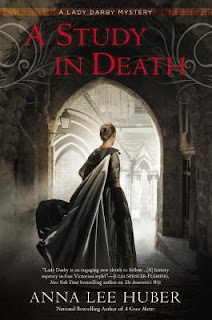 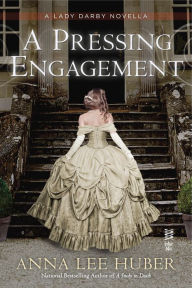 From Goodreads:
Scotland, 1831. After a tumultuous courtship complicated by three deadly inquiries, Lady Kiera Darby is thrilled to have found both an investigative partner and a fiancé in Sebastian Gage. But with her well-meaning—and very pregnant—sister planning on making their wedding the event of the season, Kiera could use a respite from the impending madness.

Commissioned to paint the portrait of Lady Drummond, Kiera is saddened when she recognizes the pain in the baroness's eyes. Lord Drummond is a brute, and his brusque treatment of his wife forces Kiera to think of the torment caused by her own late husband.

Kiera isn't sure how to help, but when she finds Lady Drummond prostrate on the floor, things take a fatal turn. The physician called to the house and Lord Drummond appear satisfied to rule her death natural, but Kiera is convinced that poison is the real culprit.

Now, armed only with her knowledge of the macabre and her convictions, Kiera intends to discover the truth behind the baroness's death—no matter what, or who, stands in her way…

From Goodreads:
In this delightful novella from the national bestselling author of A Study in Death, Lady Kiera Darby has one last mystery to solve before she can walk down the aisle...

Scotland, 1831. With her wedding to fellow investigator Sebastian Gage only a day away, Kiera is counting down the hours. But just when matrimonial jitters threaten to consume her, Kiera receives a welcome distraction in the form of a mysterious gold necklace.

The Celtic torc, thought missing for decades, was directly involved in a recent investigation. Now, Kiera feels compelled to uncover the truth behind its sudden reappearance.


But with an overwhelming flock of wedding guests, a muddled cat, an unpaid favor, and a ferocious storm throwing things into disarray, it's anyone's guess whether Kiera and Gage will actually make it to the altar...

My Review:
Yeah, it was so much fun to read these books! They're just so easy to read, I just devoured them! I love reading about Kiera and Gage, they're a fantastic couple, and the mysteries they investigate are intriguing. And oh, the characters that they encounter, they're so interesting!

A Study in Death had a lot of drama. We got to meet Lord Gage, and boy was there a lot of barbs slung back and forth! There was also a lot of bickering between Kiera and Gage, which was fun but a bit hard to read, though I knew they wouldn't separate, at least not permanently, because of the future books in the series. We also learned what happened in Greece, and I feel so bad for him for going through that!

A Study in Death had the first case that they weren't asked to investigate, in fact, most of those that were closest to the victim didn't want it investigated. Which of course was a difficulty, and having to even prove that she was a victim instead of dying of natural causes. So it was interesting watching them try to get around all that and figure out what happened!

I love the fact that the torc that was in A Grave Matter showed up in A Pressing Engagement. So we got to solve that little mystery, as well as all the bustle around the wedding, or avoiding the planning and the last minute details. Just a fun read!

This series is so fantastic and enjoyable and wonderful, and I can't wait to read more!

A Study in Death: