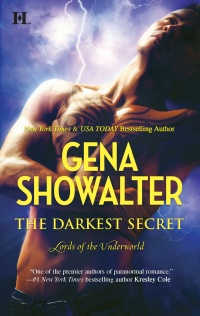 From Goodreads:
Keeper of the demon of Secrets, Amun can manipulate the darkest thoughts of anyone nearby. But when new demons possess him, the immortal warrior must be chained and isolated to protect those he loves. Death is his only hope of release—until he meets Haidee, a fellow prisoner whose beauty and hidden vulnerability draw him into a reckless test of his loyalty…

Haidee is an infamous demon assassin, raised to despise Amun's kind. Yet how can she hate the man whose touch sets her aflame? But to save him, she must give herself body and soul…and face the wrath of a powerful adversary sworn to destroy her

My review:
Wow. Gena Showalter can't get any better! Actually, if one would consider to have their DNA cloned, and have the brain's linked, and all those ideas, and all those hands...Then we'd get those promised 50 LotU books a heck of a lot faster! And that would be an improvement to having to wait half a year, get 2 or 3 books, then another half year, and having this cycle back and forth till done. Most definitely!!!!

As always, there is Gena's customary wit and romance, heat and love. And problems. Boy, where there problems! First with Strider and Haidee, and then Haidee and Amun, and Amun with Strider, and Strider with Kaia. Pure awesomeness!!!

Love how the emotion, tension, and relationships grow!!! Love the book! Wish I could go back in time to reread it, and not know what was coming again! Oh, well, there's always the next book, The Darkest Surrender, and the one after that, and that...or rereading the previous 6 books :)

If you haven't read this book yet, or the series, or any Gena Showalter book, I'd suggest you get on it right away, if you don't read adult, she has a YA series, Intertwined, so there's something for all ages!