Week 36 Review: Sisters of the Sword 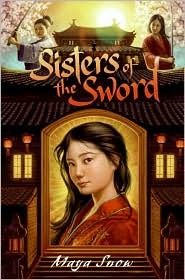 From Goodreads:
Kimi dreams of being a great samurai warrior, but she and her sister, Hana, are young ladies of feudal Japan, daughters of the Jito of the province. Her future seems clear: Girls do not become samurai.

Then, betrayal shatters the sisters' world. Their power-hungry uncle murders their father, and their mother and little brother mysteriously disappear. Determined to seek revenge and restore their honor, they disguise themselves as boys to train at a school for samurai. Kimi and Hana are thrown headlong into a life of warrior codes, sharp swords, and shadowy figures—as they work with fierce determination to avenge the brutal wrongs done to their family.

In a flash, life has swept them into a terrible adventure, more heart-pounding than Kimi and Hana ever could have imagined . . . and once it has been set in motion, nothing will ever be the same.

My Review:
This book was really interesting. I really liked that girls were training to be samurai, even if they had to pretend to be boys. A reason I don't like historical, are because they have a very large potential to be sexist, because that was the times were then.

I just wish that they could say who they were, it would get them out of a lot of bad situations, but then they would probably die, so that'd be bad.

This was a really good book, but it's more for kids under 15, and over 30. Other then that, it's really good!