Week 10 Reviews: The Perfect Date, Daniel's First Sighting, Before the Fire, What Happened to Trevor, Daniel in L.A., Arriane's Day Out, Daniel and Gabbe's Fight, A Date With an Outcast, Cam Goes Hunting, Inside Francesca's Office, Shelby's Journal, Miles in the Dark, Shelby's First Glance, Daniel on Trial, Daniel's Gift, Daniel's Journal, Angels in the Dark 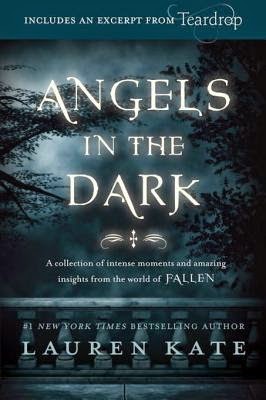 From Goodreads:
A 50+ page collection of intense moments and amazing insights from the dangerously romantic world of the Fallen series. A party that goes terribly wrong, Arriane on a heavenly shopping spree, Daniel navigating the streets of L.A., Miles taking a step into darkness, an uncomfortable scene at Shoreline, an angel on the hunt, and a deleted scene of a date between Luce and Daniel make up this digital collection, offering a unique glimpse into the world of Fallen, a must for any fan of Lauren Kate.

My Review:
Yes! I loved these scenes from characters I've really grown to enjoy and love, from before Fallen, and between all the books, till before Rapture. Though the one deleted scene was from Rapture, I'm pretty sure! What with the location and what was going on and how it ended and stuff!

I really enjoyed these looks at these various characters, some we know as well as we can, like Daniel, which gave us some extra insights, and others were a bit further out, like some of the other angels, so yeah, that was really great!

I loved that part of the ritual that Daniel and Luce have is him giving her the white flowers, and now I forget the name of them, and I forget if he did so in the books, because it's been so long since I've read them now, which is why I wanted to read them close together. Oh, well!

If you want the fullest experience of the Fallen series, you'll have to read these scenes! But if you don't, not reading them won't impact the actual books. These are just bonus!

What Happened to Trevor:

A Date With an Outcast:

Miles in the Dark:

Angels in the Dark: