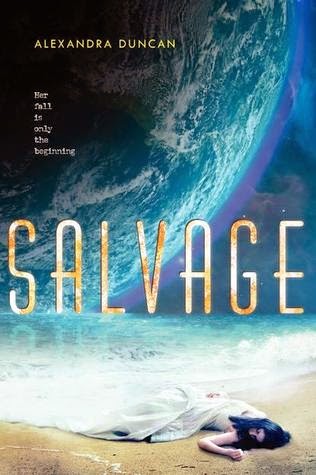 From Goodreads:
Salvage is a thrilling, surprising, and thought-provoking debut novel that will appeal to fans of Across the Universe, by Beth Revis, and The Handmaid's Tale, by Margaret Atwood. This is literary science fiction with a feminist twist, and it explores themes of choice, agency, rebellion, and family.

Ava, a teenage girl living aboard the male-dominated, conservative deep space merchant ship Parastrata, faces betrayal, banishment, and death. Taking her fate into her own hands, she flees to the Gyre, a floating continent of garbage and scrap in the Pacific Ocean.

This is a sweeping and harrowing novel about a girl who can't read or write or even withstand the forces of gravity. What choices will she make? How will she build a future on an earth ravaged by climate change?

Named by the American Booksellers Association as a Spring 2014 Indies Introduce Pick.

My Review:
So I enjoyed this book a lot! It was just that the beginning, that world that she was in, was just so unfair, and she only understood the surface of that, that made the beginning hard to read. There was also the use of "so," but I got used to that!

The idea of multiple wives, after everything that's been happening after the past century, sucks. That Luck's dad was the one she was to marry, not Luck, is just horrible. But he was wrong when he said that mean thing. She's a human being, and she matters!

So I really enjoyed Ava's journey, of how she learned how different her world is from the rest of us, basically, from society's roles, and what she is truly capable of. Her grandfather's book, while horrible, did illustrate some differences!

I really with in that ending, that she had told Luck and the others that she was a captain. Because I thing that would've blown their minds more then her refusal to be his second wife! And she earned that!

Really great book, great touch on what she named the ship, and I can't wait for the companion book!