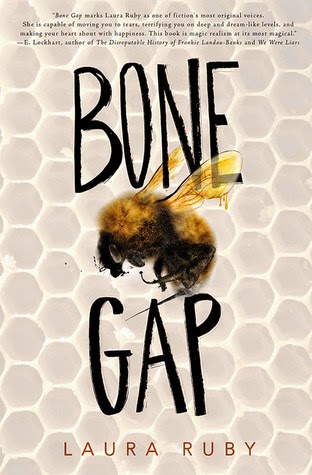 From Goodreads:
Everyone knows Bone Gap is full of gaps—gaps to trip you up, gaps to slide through so you can disappear forever. So when young, beautiful Roza went missing, the people of Bone Gap weren't surprised. After all, it wasn't the first time that someone had slipped away and left Finn and Sean O'Sullivan on their own. Just a few years before, their mother had high-tailed it to Oregon for a brand new guy, a brand new life. That’s just how things go, the people said. Who are you going to blame?

Finn knows that's not what happened with Roza. He knows she was kidnapped, ripped from the cornfields by a dangerous man whose face he cannot remember. But the searches turned up nothing, and no one believes him anymore. Not even Sean, who has more reason to find Roza than anyone, and every reason to blame Finn for letting her go.

As we follow the stories of Finn, Roza, and the people of Bone Gap—their melancholy pasts, their terrifying presents, their uncertain futures—acclaimed author Laura Ruby weaves a heartbreaking tale of love and loss, magic and mystery, regret and forgiveness—a story about how the face the world sees is never the sum of who we are.

My Review:
I enjoyed reading this book so much! Such a great story, and so strange, and there were just a lot of fantastic things going on! This was an unconventional love story, that the guy who partially saved the girl, before she saved herself, was in love with another, saved the girl for his brother. Now that's family!

I really enjoyed Finn's condition, that we don't find out really about it until another character realizes it. And while I wish that we'd gotten Sean's reaction, well, Roza had a really great quote about it, "Everyone knew," or along those lines. The just didn't know what they knew, it's not exactly a common thing, I hadn't heard of it before this book!

I really love that this is a kinda retelling of the Hades and Phonephone myth, but more of, that happened, and now it's happening again sort of thing. And yeah, that was really fantastic to read about, and since there were things like Charlie Valentine and Finn's best friend, Miguel, well, I would really love a sequel or a companion book!

Such a really fantastic book! I really enjoyed reading it, and a sequel or a companion book would be really great! It seems like there was more of this world that could be explored!