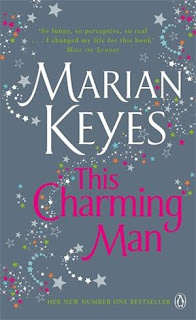 From Goodreads:
Paddy de Courcy is Ireland's debonair politician, the "John F. Kennedy Jr. of Dublin." His charm and charisma have taken hold of the country and the tabloids, not to mention our four heroines: Lola, Grace, Marnie, and Alicia. But though Paddy's winning smile is fooling Irish minds, the broken hearts he's left in his past offer a far more truthful look into his character.

Narrated in turn by each woman, This Charming Man explores how their love for this one man has shaped their lives. But in true Marian Keyes fashion, this is more than a story of four love affairs. It's a testament to the strength women find in themselves through work, friendship, and family, no matter what demons may be haunting their lives. Depression, self-doubt, domestic abuse—each of these women has seen tough times in life, and it's through Keyes's wonderful storytelling ability that these subjects are approached with the appropriate tone and candor. Her deft touch provides a gripping story and, ultimately, a redemptive ending.

My Review:
My, what a long book! But a good long book, at almost 900 pages in the paperback.

I loved all the POV's, how they all came together in a very good ending! The only thing I didn't like was that some months passed between some parts, and it was a bit into them that they said that.

The characters were all different, but they had something in common, that they were all connected to Paddy, and how they all overcame that connection, since it wasn't such a good thing to be connected to him. He was kinda evil. Actually, I wanted to beat him with a stick, it was what he deserved for what he did to them!!!!! I wish I could, he got off a bit lightly, they should've gone at him with the police, that would've really brought him down, but unfortunately, the situation being what it was, the police weren't an option, but at least he got a bit of what was coming to him!

And I loved the ending, it was just what was needed for the characters!

I enjoyed this book, and I hope that you guys will, too!