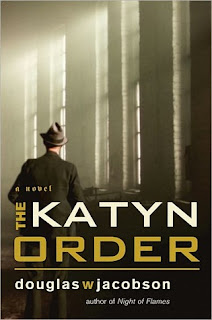 From Goodreads:
The German war machine is in retreat as the Russians advance. In Warsaw, Resistance fighters rise up against their Nazi occupiers, but the Germans retaliate, ruthlessly leveling the once-beautiful city. American Adam Nowak has been dropped into Poland by British intelligence as an assassin and Resistance fighter. During the Warsaw Uprising he meets Natalia, a covert operative who has lost everything—just as he has. Amid the Allied power struggle left by Germany’s defeat, Adam and Natalia join in a desperate hunt for the 1940 Soviet order authorizing the murders of 20,000 Polish army officers and civilians. If they can find the Katyn Order before the Russians do, they just might change the fate of Poland.

My review:
I loved this book! I loved the history, the budding romance, and the war effort, even if it was mostly in vain, they took out some nasty Nazis. The history was of something that I'd never thought in connecting with WWII, but it's something that happened. I've just never really thought of Poland before-I don't even know where it is, except that it's in Europe, and I'm guessing now that it's near, or borders, Russia, and it's in between Germany and Russia.

But this book showed me a world that I had rarely thought about, and just opened it wide open. I enjoyed all the places, all the characters, and how everything was aimed for the Katyn Order. It just wrapped up so beautifully, even if tinged with sadness, the main objective of the characters for the better half of the story, wasn't fulfilled, and it was left without answers why it wasn't, just that it wasn't, and there was one element to blame, but we didn't learn why. That why would be great to know. It's just kinda killing me, there's so many options!

But this was a great book, so I'm glad I won it on Goodreads! You'd better check it out!