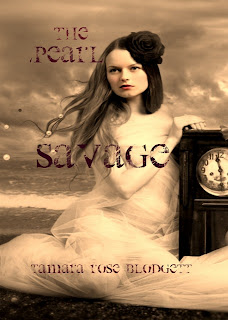 Bracus, who as a protector of the Band, must save his clan's people from extinction Outside...

Prince Frederic, her sadistic betrothed...bent on having her, and she, escaping his grasp...

Suddenly, with both the clan and sphere peoples' destiny in her hands, Clara finds herself torn between love and duty...

My Review:
I loved this book, and I got it the author, so thanks, Tamara!

Clara was a great character, she endured pain and suffering that she shouldn't have had to endure, but she did because she was her people's princess, and she was going to keep the kingdom the way her Dad, the King of their sphere, had left it, and wanted it to be, with morals, principals, like being with the people, saying thanks to the people. Things that showed that she cared about the people-because she did.

This was a very great book, and I hated The Queen, as she refers to Ada, and the evil little abuser, Prince Frederic. Clara was between a rock and a hard place, and somehow, she got out between the 2, and into the soft pillow that was the Outside.

All in all, a book you guys should really check out! It's just something that you need to read!