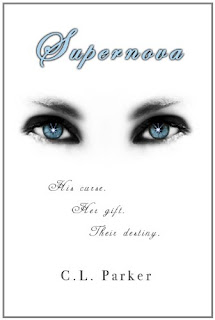 From Goodreads:
As part of a chosen bloodline, Kerrigan Cruz has inherited a gift: supernatural powers which give her the ability to protect a person's free will from those who wish to alter destiny for their own design. After her grandmother's passing, Kerrigan meets Dominic Grayson, an alluring stranger with a secret of his own. Dominic has been cursed, touched by both darkness and light, and Kerrigan is the only one who can save him. In their world, only three things are certain: His curse. Her gift. Their destiny.

My Review:
I won this book from Read Me Bookmark Me Love Me, so thanks to Lisa, and the author, C. L. Parker!

I loved Kerrigan as a character, she had this strength about her, this ability to do what few could do, and of that few (that I knew of), all were related to her. I loved that about her, and I also loved the almost weakness she had, I don't know how to describe it, but it was in her relationship with Dominic, and it was with her friends, like Gabe, whom I loved, he was really funny, outrageous, and just a laugh-out-loud kinda guy, with his comments being a bit...rude, one could say, and he was very much a diva, and I loved how he didn't let anybody stop him from being who he was.

I hated the bad guys, they were evil, and I almost thought her "fiancé" was the devil, because of her bad breath, and that there'd be a a bit supernatural battle between them, but the big battle was something from Dominic's past, not her's.

The only thing I want to know, now that I'm done, is a bit more about her Grammy's death, and of the memory that she had at the beginning, of the crows and the darkness, and whether or not that really happened...

All in all, a good book, I hope you guys check it out!