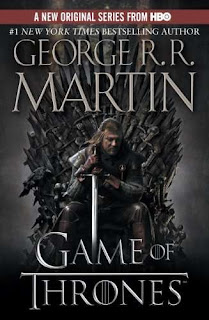 From Goodreads:
Long ago, in a time forgotten, a preternatural event threw the seasons out of balance. The cold is returning, and in the frozen wastes to the north of Winterfell, sinister forces are massing beyond the kingdom's protective wall. To the south, the King's powers are failing, and his enemies are emerging from the shadows of the throne. At the center of the conflict lie the Starks of Winterfell, a family as harsh and unyielding as the frozen land they were born to. Now Lord Eddard Stark is reluctantly summoned to serve as the King's new Hand, an appointment that threatens to sunder not only his family but also the kingdom itself. A heroic fantasy of lords and ladies, soldiers and sorcerers, assassins and evildoers who come together in a time of grim omens. The first volume in George Martin's series.

My Review:
I bought this in the airport while we were waiting to get on the plane to NY, with money that was supposed to get food. Yep. I'm kinda book obsessed. But I just had to buy this book, I'd seen ads for it, and people have talked about it, so I had to get it!

And I'm a bit insane, I read this book from Sunday night, to Monday morning, the day I had a physics final-I didn't go to sleep, and I read a good 600 pages in that time. It was quite fun. But I probably didn't so so well on the test as I could've done!

Loved this book, loved the characters, loved all the jumping, and just this was a great book that I read very fast, and the TV show is very similar, word for word in some places, and follows almost all the plots (just a few changes) and I really am having fun reading and watching TV.