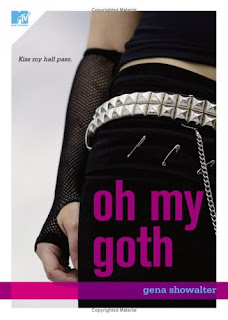 From Goodreads:
A fiercely individualist Goth girl wakes up to discover that the whole world has gone Goth and she's actually — gag — popular.

Jade Leigh is a nonconformist who values individuality above all else. She has a small group of like-minded Goth friends who wear black, dabble in the dark arts, and thrive outside the norm. They're considered the "freaks" of their high school. But when Jade's smart mouth lands her in trouble — again — her principal decides to teach her a lesson she'll never forget.


Taken to a remote location where she is strapped down and sedated, Jade wakes up in an alternate universe where she rules the school. But her best friends won't talk to her, and the people she used to hate are all Goth. Only Clarik, the mysterious new boy in town, operates outside all the cliques. And only Mercedes, the Barbie clone Jade loathes, believes that Jade's stuck in a virtual reality game — because she's stuck there, too, now living the life of a "freak." Together, they realize they might never get back to reality...and that even if they do, things might never be the same.


My Review:
I absolutely adored this book! It was so great, and it's nice to read a book by one of your favourite authors, so you're one step closer to have read all that they've written (well, published that you know about, that's on their site, ext)

Jade was awesome, I loved how she was a non-conformist, who did things her own way, and who wouldn't back down from that, even when it got her into (unfairly) trouble. Which just makes it all the more fun, when in this world, what was non-conformist is the opposite-being goth is what a parent wants in this book. And her friends are friends with Mercedes, and Mercedes old friends are Jade's in this new world!

I also loved how she was with Clarik, and how she responded to the whole "Virtual reality game" thing, since it was a total game changer in the book. That it wasn't the real world? Yeah, that just means they could get home!

And I loved the ending. that people are happy, and those that deserve the virtual reality were put in it, because they really deserved it! Evil, mean, nasty evils. And to have to go though what Jade and Mercedes did for a bit of an attitude adjustment, yeah.

All in all, a great book, one I hope you guys check out since it's by Gena Showalter!