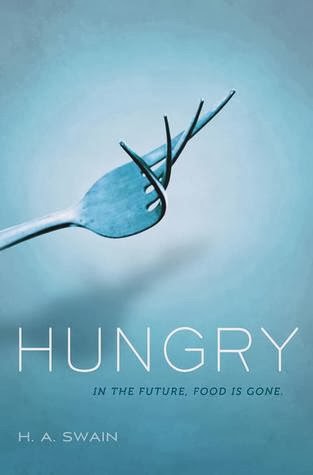 From Goodreads:
In the future, food is no longer necessary—until Thalia begins to feel something unfamiliar and uncomfortable. She's hungry.

In Thalia’s world, there is no need for food—everyone takes medication (or “inocs”) to ward off hunger. It should mean there is no more famine, no more obesity, no more food-related illnesses, and no more war. At least that's what her parents, who work for the company that developed the inocs, say. But when Thalia meets a boy who is part of an underground movement to bring food back, she realizes that most people live a life much different from hers. Worse, Thalia is starting to feel hunger, and so is he—the inocs aren’t working. Together they set out to find the only thing that will quell their hunger: real food.

H. A. Swain delivers an adventure that is both epic and fast-paced. Get ready to be Hungry.

My Review:
Oh, oh, oh! What a great book, because the idea that humans don't eat, and subsequently, the whole world without that, well, just a fascinating idea, and practical, too, if a person doesn't need to eat, then they don't need to food or water, and then something that kills so many people right now, doesn't exist, then well, the world would be a better place!

But the there's a problem. What makes it possible to not have to eat, the genes and the things treatment, well, in some people, it just makes them, well, hungry. And so they do need to eat. And plus, there's people who'd prefer to eat. And yet, they're not getting that chance, that that's what caused a lot of the conflict in this book, almost 3 quarters. The last quarter's conflict pretty much came from the other side of the camp, the people who do want to eat, and who established a cult group and yeah, they were pretty bad!

It's the extremes that are the problem, and it's the middle that seems to be the best, steady, and offers the best of both worlds, that's why it seems most arguments, they both usually have valid points, and if you took those valid points, in this case, most people on the treatment, and some people eating, then things would just be a whole lot better!

One thing that got to me, was that there were 2 fights in this book, and they were similar, pretty close in the book, and about the same subject. You'd have thought that they'd hashed out all the details, but they go over some of them again, and that wasn't the most excited to read.

But yeah, I really enjoyed this book, it was really good, and ended on a hopeful, positive note!