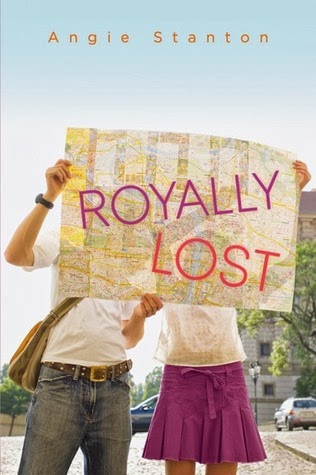 From Goodreads:
Dragged on a family trip to Europe’s ancient cities, Becca wants nothing more than to go home. Trapped with her emotionally distant father, over-eager stepmother, and a brother who only wants to hook up with European hotties, Becca is miserable. That is until she meets Nikolai, a guy as mysterious as he is handsome. And she unknowingly finds herself with a runaway prince.

Nikolai has everything a guy could ask for-he's crown prince, heir to the throne, and girls adore him. But the one thing he doesn't have...is freedom. Staging a coup, he flees his kingdom and goes undercover on his own European tour.

When Nikolai and Becca meet, it’s their differences that draw them together. Sparks fly as they share a whirlwind of adventures, all the while dodging his royal guard. But Becca's family vacation ends in a matter of days. Will Nikolai and Becca be forced to say goodbye forever, will his destiny catch up to him, or will they change history forever?

My Review:
Oh, this was just a nice, fun book! Such a sweet romance, and such a great book, I really enjoyed it, because I mean, meeting up with a guy, over and over, at first, at random, the planned, and then with such great characters? I loved it!

Reading this book, was like reading a fairy tale, and yeah, that was fitting, because he is royalty, but modern day, what with Nikolai's concerns about his family and his kingdom, about expenses, and his family expectations, there was that.

And there was her family, her dead mom, stepmom, older brother, and dad, on a cruise trip around Europe, not really dealing with their issues, just like real people, that just added that touch of reality that made sure that we knew this was real, not imaginary!

Oh, did I enjoy their romance, it was so sweet, and then there was the skinny dipping incident, and how reporters took pictures, and the blow out from that, to the ending, which was just so sweet, meeting up again, after her mail and calls wouldn't go through. Just so good!!

I loved this book, and I'd happily read it again in a heartbeat!