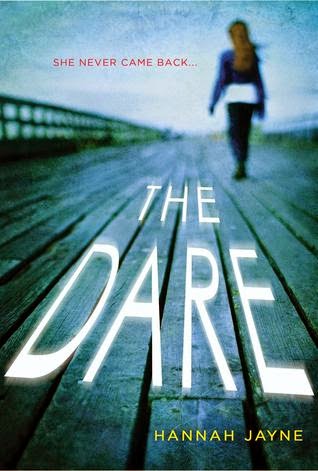 From Goodreads:
Two jumped off the pier that night...but only one came back alive

Bryn did everything with her best friend Erica. So when someone dared Erica to jump off the pier one night at Harding Beach, Bryn was right by her side. But when Bryn made it back to the surface, Erica was nowhere to be found. Bryn tries to make a fresh start by burying her memories of that awful night. But when a Twitter post from "EricaNShaw" pops up on her feed and a chilling voice mail appears on her phone, she realizes that someone isn't ready to let go of the past...

My Review:
Wow, I really enjoyed this book! Such a gripping mystery, wonderful writing, and characters that were real!  And a bit of romance, but that wasn't the main concern-that was the psychophysical warfare that was played on Bryn with tactics like trying to convince Byrn that Erica was still alive.

The tactics used were so nefarious, we as the reader, as well as Byrn, have no idea whether or not it's Erica that's doing this, or not, and if so, did Erica survive the dare? Speaking of the dare, it wasn't all that much, just being a bit of nudity and jumping into the ocean. At night. Separate, the elements are harmless, but them, with the condition of the ocean, is what everything thought, and could be, deadly.

The cover! Very creepy, and I don't know if I like the change to the tagline, it was one of the ending lines in the book, about friends, but now it's "She never came back..." so I don't know if I want the creepy what's there line, or the less creepy, but I know is in the book line. I guess I'll go with creepy!

Who the bad guy turned out to be? Half of it was almost expected, but the other half? That was a twist that I didn't see coming, for me, looking back, there's only one real clue that nudged it to go that way, but telling would be spoiling and I don't want that, because I try to avoid them!

I really enjoyed this book, another great YA thriller from Hannah Jayne, must read See Jane Run soon, and I'll have read all of them that are out right now!!!