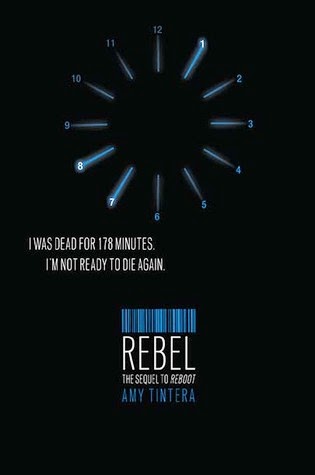 From Goodreads:
The sequel to the action-packed Reboot is a can't-miss thrill ride, perfect for fans of James Patterson, Veronica Roth, and Marie Lu.

After coming back from death as Reboots and being trained by HARC as soldiers, Wren and Callum have finally escaped north, where they hope to find a life of freedom. But when they arrive at the Reboot Reservation, it isn't what they expected. Under the rule of a bloodthirsty leader, Micah, the Reboots are about to wage an all-out war on the humans. Although Wren's instincts are telling her to set off into the wilderness on their own and leave the battle far behind, Callum is unwilling to let his human family be murdered. When Micah commits the ultimate betrayal, the choice is made for them. But Micah has also made a fatal mistake . . . he's underestimated Wren and Callum.

The explosive finale to the Reboot duology is full of riveting action and steamy love scenes as Wren and Callum become rebels against their own kind.

My Review:
I absolutely loved this book! It was so good, and interesting! And while I admit that I've pretty much forgotten what happened in Rebel, and what the terms mean, but that didn't mean that I didn't enjoy this book, because I most definitely did!

Loved how they won, by working together, and not being species-ist, between humans and Reboots. And I loved the nicknames that they could have, Huboot, or other half and half names, because they were really just awesome!!

Loved the confrontation in their romance, if Callum was really seeing Wren for herself or not, or just seeing what he wanted to see, and that was just great, because people, even Reboots who are evolved humans, don't always get along!

The ending? With Wren sitting by a new reboot, and saying that it didn't matter how long it'd been since they rebooted? That was such a sweet ending, and brought home what this series to me, seemed to be about, about differences, and how the ones that people think are bad, just don't matter!

Yeah, I really enjoyed this book, and it was really good! Can't wait to see what Amy Tintera writes next!!!