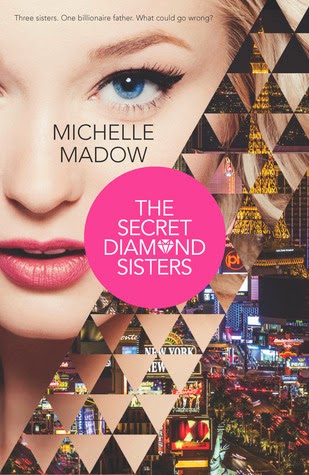 The three sisters grew up not knowing their father and not quite catching a break. But it looks like their luck is about to change when they find out the secret identity of their long-lost dad—a billionaire Las Vegas hotel owner who wants them to come live in a gorgeous penthouse hotel suite. Suddenly the Strip's most exclusive clubs are all-access, and with an unlimited credit card each, it should be easier than ever to fit right in. But in a town full of secrets and illusion, fitting in is nothing compared to finding out the truth about their past.

My Review:
Oh, I really enjoyed this book! I mean, such wonderful characters, a bit of a mystery, and some romances that may or may not have happened, because of the reasons why behind them, or how they treated each other, or sociality niceties, that you shouldn't become romantically linked to your soon to be step sibling!

I enjoyed all three sisters, and the different POV's, Savannah, Courtney, Peyton, and Madison, and each character was unique, and I could separate them easily, from Savannah's pretty naive hope, Courtney's practicality, Peyton's  bad ass/hard ass exterior, and Madison's bitterness, that the Diamond sisters seem to be ruining her life.

And as part of the whole pattern, it was emails, then the 4 POV's, and then it would repeat, and the cycles, and the emails, what was in them, I only wish that we could've gotten at least usernames for each comment, not just numbers, so I could keep track of who was saying what.

The romance, yeah, I felt sorry for Savannah on being used, Courtney that she couldn't be with him, and Peyton, because she was rejected because they couldn't be together, and took up with a guy that was using her. So yeah, not fun! But there were some really great romantic moments!!

Yeah, I really enjoyed this book, and I can't wait for the next one!!