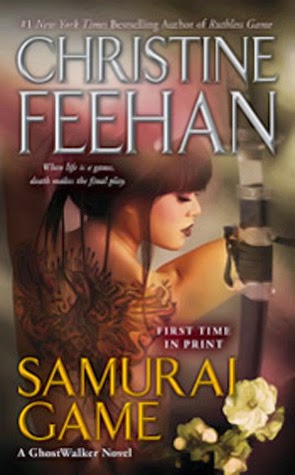 From Goodreads:
n a world so dark and seductive, expect nothing less than a triple-cross in the explosive all-new Ghostwalker novel by #1 New York Times bestselling author Christine Feehan…

In an underground club, a high-ranking public official spends his secret nights indulging in fantasies as exciting as they are depraved. For a seductive employee of the Dungeon, it's her job to fulfill them. But she's playing a far more dangerous game—one of blackmail, politics, and murder that reaches into the shadow world of the Ghostwalkers, and the creation of a spectacular, one-of-a-kind new weapon of defense.

But when a dictator makes his own catastrophic moves, the Ghostwalkers have no choice but to bring in two major players—a man and woman both driven by passion and revenge. Both expendable. Both with nothing left to lose.

My first review of Samurai Game
My Review:
I can't believe that it's been just under 2 years since I read this book! And that we haven't gotten another GhostWalker book since! But we are getting Viper Game sometime in January 2015, so yeah, finally! Anyway, I loved rereading this book!

Azami, is tied for most tortured with Ken, though her torture was longer, slower, and scars not just on her skin, but to the point where her heart was replaced, and Whitney thought she should be grateful for that? He's really not right in the head, and I can't wait till they finally take him down!!

I think my most favourite scene in this book is when Sam is recuperating from being shot and the 2nd gen patches, Azami is with him, and slowly members of his team trickle in, telling the story about a mission they had, with a Frenchman, a bar that if you swam with the crocs or alligators, whichever was there, that you got free drinks at that bar for the rest of your life, and a storm. It was pretty hilarious, how they kept embellishing it, and then told the truth, that had bits and pieces from the story. It was just so funny!

It's funny, because on a character guide, it's mentioned that Thorn was the most loved of all the girls by the girls, but I don't remember which book they might have pulled that detail from, and reading this book, the only real interaction she has with the women that loved her is Sabre, and yeah, I wish we got to see that comment play out more, because Lily didn't recognize her.

I really enjoyed this book, and yeah, can't wait for Viper Game, which is Gator's brother's book!