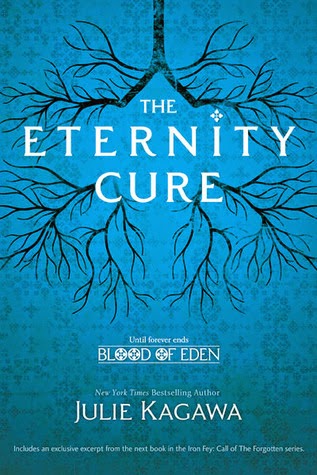 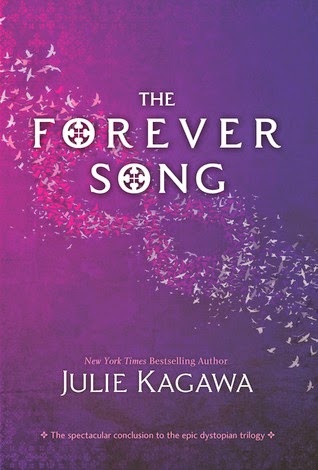 From Goodreads:
In Allison Sekemoto's world, there is one rule left: Blood calls to blood

She has done the unthinkable: died so that she might continue to live. Cast out of Eden and separated from the boy she dared to love, Allie will follow the call of blood to save her creator, Kanin, from the psychotic vampire Sarren. But when the trail leads to Allie's birthplace in New Covington, what Allie finds there will change the world forever—and possibly end human and vampire existence.

There's a new plague on the rise, a strain of the Red Lung virus that wiped out most of humanity generations ago—and this strain is deadly to humans and vampires alike. The only hope for a cure lies in the secrets Kanin carries, if Allie can get to him in time.

Allison thought that immortality was forever. But now, with eternity itself hanging in the balance, the lines between human and monster will blur even further, and Allie must face another choice she could never have imagined having to make.

From Goodreads:
Vengeance will be hers.

Allison Sekemoto once struggled with the question: human or monster? With the death of her love, Zeke, she has her answer.

Allie will embrace her cold vampire side to hunt down and end Sarren, the psychopathic vampire who murdered Zeke. But the trail is bloody and long, and Sarren has left many surprises for Allie and her companions - her creator Kanin, and her blood brother, Jackal. The trail is leading straight to the one place they must protect at any cost - the last vampire-free zone on Earth, Eden. And Sarren has one final, brutal shock in store for Allie.

In a ruined world where no life is sacred and former allies can turn on you in one heartbeat, Allie will face her darkest days. And if she succeeds, her triumph will be short-lived in the face of surviving forever alone.

THE FINAL HUNT IS ON.

My first review of The Eternity Cure
My Review:
I absolutely loved these books! They were so good, written excellently, and it ended so well, taking in things that have been developing since the first book, and wrapped them up in a pretty well, with things left for them to do after the ending, but with hope!

I commented in my 2nd review of Immortal Rules about wondering how Allie could work with Jackal after what he did, but Eternity Cure reminded me again why she did, because they had a common goal that could be accomplished better together, and that they were going to try and kill each other, maybe, when they were done.

Zeke! I knew what was coming for him, and I just dreaded it! Though I'm wondering a bit at how I knew that he was made into a vampire, because there aren't that many hints. I know it was a guess,  And then Forever Song, we learn more about vampires because of his situation, and it's so sad, but we also learn something about Allie that helps in the end, well, Kanin learns something that we're told about in the ending!

I loved her and Jackal's bantering, and how Kanin just kinda ignored it for the most part, it was a dysfunctional family road trip, and they were the siblings, and they bickered, and even if some of it was life and death, they were vampires, so yeah, it just so funny!

I loved how they found the cure for the newest and most dangerous of all the diease virus things, because it was airborne like the first, throughout whatever species it was in, human, rabid, and vampires could get it from biting an infected human or attacked by a rabid, and humans could get it from being bitten by an infected vampire or being attacked by a rabid, and rabids, I forget how they got it, but they did. Yeah. Something that would ensure Sarren's Scorched Earth policy!

I loved how they finally defeated Sarren, and how they thought they got him-but he came back. I thought he might like a Scream movie villain, you like have to just keep giving them killing blows until you can be absolutely, absolutely with 100 % certainty that they are truly and fully dead! So of course he comes back, but then they win! Whoot!

I felt sad about Kanin, but it was his choice, and he finally felt that he was repaying his debt for giving humans the means to accidental create Rabidism. So yeah, that was a bittersweet moment, but it left hope for the future, and yeah, just really good!

I loved these books, they were just so good, and I can't wait for the Talon series and the 3rd book in the Call of the Forgotten, Iron Fey series!!