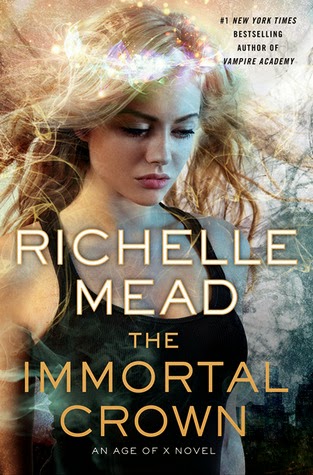 From Goodreads:
The #1 New York Times bestselling author of the Vampire Academy and Bloodline series returns with the second installment in her acclaimed Age of X series.

Gameboard of the Gods introduced religious investigator Justin March and Mae Koskinen, the beautiful supersoldier assigned to protect him. Together they have been charged with investigating reports of the supernatural and the return of the gods, both inside the Republic of United North America and out. With this highly classified knowledge comes a shocking revelation: Not only are the gods vying for human control, but the elect—special humans marked by the divine—are turning against one another in bloody fashion.

Their mission takes a new twist when they are assigned to a diplomatic delegation headed by Lucian Darling, Justin's old friend and rival, going into Arcadia, the RUNA's dangerous neighboring country. Here, in a society where women are commodities and religion is intertwined with government, Justin discovers powerful forces at work, even as he struggles to come to terms with his own reluctantly acquired deity.

Meanwhile, Mae—grudgingly posing as Justin’s concubine—has a secret mission of her own: finding the illegitimate niece her family smuggled away years ago. But with Justin and Mae resisting the resurgence of the gods in Arcadia, a reporter's connection with someone close to Justin back home threatens to expose their mission—and with it the divine forces the government is determined to keep secret.

My Review:
Oh, my, what a spectacular book! I have so much love for this book, I don't know why my heart's not bursting at the seams, because wow, was it spectacular and amazing and wonderful and awe-inspiriting, and creating pulse pounding, hands making claws from agitation because of unfairness, and so much more, this was a big "feels" book for me!

While it's been a while since I read the first book, this one got me up to speed fairly quickly, and it was vastly different from the first one, which was mainly a murder investigation but a religious one. This book was more about personal missions, from Mae looking for her niece, and Justin may or may not accepting Odin as his god, teaching some of the Arcadian's about Odin, and yeah, having his deal with his deal with Odin.

When they were in Arcadia, my fingers twitched a lot, because of the unfairness of their country, I could see why people would want to leave it, though RUNA is pretty full of itself. I mean, the blamed women for men's failings, and whipped them, made them wear cover-all clothing when meeting important people in the church, or if they angered their males. I mean, this is a country that used to be a good deal of the US. How could it turned so bad, in only a century?

The plan that Justin comes up with, for a while, I thought that it wouldn't work, that they'd actually manage to take down the ego network, but that ending was more of an afterthought, after what happens to Mae. Which really sucked, and I hope that she goes down a different path then the one that she ended this book on, because, hello, almost all of us know who he is, and what his title is, especially if you like Norse Mythology stuff.

I absolutely loved this book (and it's cover is so beautiful, and yeah that Gameboard got a matching cover!) And I can't wait for the next book!