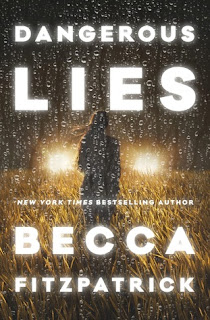 From Goodreads:
A teen is forced to make a fresh start after witnessing a violent crime—but love and danger find her anyway in this novel from Becca Fitzpatrick, the New York Times bestselling author of the Hush, Hush saga.

After witnessing a lethal crime, Stella Gordon is sent to the middle of nowhere for her own safety before she testifies against the man she saw kill her mother's drug dealer.

But Stella was about to start her senior year with the boyfriend she loves. How can she be pulled away from the only life she knows and expected to start a new one in Nebraska? Stella chafes at her protection and is rude to everyone she meets. She's not planning on staying long, so why be friendly? Then she meets Chet Falconer and it becomes harder to keep her guard up, even as her guilt about having to lie to him grows.

As Stella starts to feel safer, the real threat to her life increases—because her enemies are actually closer than she thinks…

My Review:
This book was really awesome! There was mystery and there was romance, and there were some really great characters! I really enjoyed Stella, and how she was a teenager, but was able to think like an adult and applied it to her actions!

This is the second Becca Fitzpatrick book, and I've always enjoyed them. And this book was no exception! Well-written, with things coming together so well, it was just so great! Elements that Becca Fitzpatrick is quickly being known for, and some that she's always had!

At first it didn't quite seem like there was a mystery, Stella witnessed a crime, and is going to testify, so she's in witness protection. But there was more to the story to that, and yea, that was just really awesome to read!

Really enjoyed that ending, and it was almost expected, but totally not! The little clues, why people felt the way that they did, and it was all together...yeah, that was just so, so, so fantastic and I loved reading it!

So enjoyable, so good, and yeah, just really loved it!