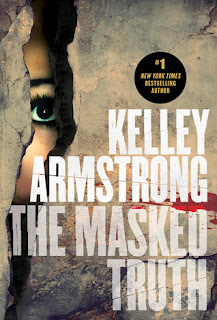 From Goodreads:
In this heart-stopping suspense thriller, #1 New York Times bestselling author Kelley Armstrong proves herself to be a master of terror and suspense.

Riley Vasquez is haunted by the brutal murder of the couple she was babysitting for.

Max Cross is suffering under the shadow of a life-altering diagnosis he doesn't dare reveal.

The last thing either of them wants is to spend a weekend away at a therapy camp alongside five other teens with "issues." But that's exactly where they are when three masked men burst in to take the group hostage.

The building has no windows. The exits are sealed shut. Their phones are gone. And their captors are on a killing spree.

Riley and Max know that if they can't get out, they'll be next—but they're about to discover that even escape doesn't equal freedom.

My Review:
This book was so fantastic! Another amazing book by Kelley Armstrong! This is reason for celebration! Plus the fact that it's YA is another reason for excitement, because overall, she's written less YA then other genres. Yep.

This book had two main points, that were interconnected. It was about mental illnesses, both those that can be worked through, and then those that you'll always have to deal with. It was also a mystery, and a really compelling one at that!

At first, I thought that almost the whole book would take place inside the building. And then they got out, and the mystery became infinitely more complicated! And it was pretty chilling, and just gave a thriller vibe!

Absolutely loved that ending! That they had figured out some of the mystery, and then all the little pieces came together, and beating the bad guys! And while they didn't have a total win, they did get the big win!

Really fantastic book! So great, and just so enjoyable and great!