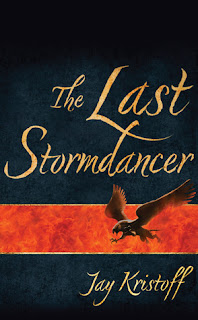 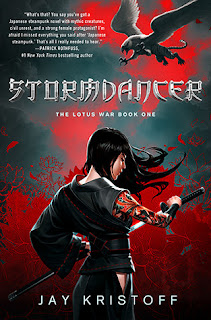 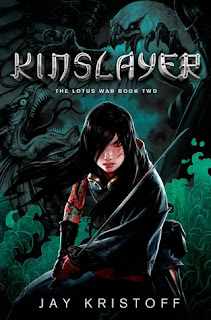 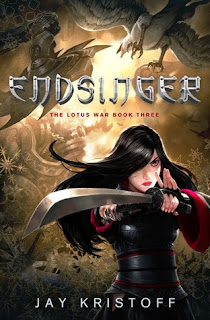 From Goodreads:
Praying For Rain is a free-to-read pdf short story, a prequel to Jay Kristoff's The Lotus War series, which tells the tale of Miho and the city of Kigen.

From Goodreads:
Your blood-red skies are filled with smoke. Your bleach-white histories with lies. You walk sleeping. Wake senseless. Breathing deep of toxic blooms and forgetting all that has gone before. But I remember.

I remember when two brothers waged bloody war over the right to sit in their father's empty chair. I remember when orphaned twins faced each other across a field of crimson and steel, the fate of the Shima Shogunate hanging in the poisoned sky between them.

I remember when a blind boy stood before a court of storms and talons, armed only with a thin sword and a muttered prophecy and a desperate dream of saving the world.

From Goodreads:
Griffins are supposed to be extinct. So when Yukiko and her warrior father Masaru are sent to capture one for the Shogun, they fear that their lives are over. Everyone knows what happens to those who fail him, no matter how hopeless the task.

But the mission proves far less impossible, and far more deadly, than anyone expects – and soon Yukiko finds herself stranded: a young woman alone in her country's last wilderness, with only a furious, crippled griffin for company. But trapped together in the forest, Yukiko and Buruu soon discover a friendship that neither of them expected.

Meanwhile, the country around them verges on the brink of collapse. A toxic fuel is slowly choking the land; the omnipotent, machine-powered Lotus Guild is publicly burning those they deem Impure; and the Shogun cares about nothing but his own dominion. Yukiko has always been uneasy in the shadow of power, when she learns the awful truth of what the Shogun has done, both to her country and to her own family she's determined to do something about it.

Returning to the city, Yukiko and Buruu plan to make the Shogun pay for his crimes – but what can one girl and a flightless griffin do against the might of an empire?

From Goodreads:
A SHATTERED EMPIRE
The mad Shōgun Yoritomo has been assassinated by the Stormdancer Yukiko, and the threat of civil war looms over the Shima Imperium. The Lotus Guild conspires to renew the nation's broken dynasty and crush the growing rebellion simultaneously – by endorsing a new Shōgun who desires nothing more than to see Yukiko dead.

A DARK LEGACY
Yukiko and the mighty thunder tiger Buruu have been cast in the role of heroes by the Kagé rebellion. But Yukiko herself is blinded by rage over her father's death, and her ability to hear the thoughts of beasts is swelling beyond her power to control. Along with Buruu, Yukiko's anchor is Kin, the rebel Guildsman who helped her escape from Yoritomo's clutches. But Kin has his own secrets, and is haunted by visions of a future he'd rather die than see realized.

A GATHERING STORM
Kagé assassins lurk within the Shōgun's palace, plotting to end the new dynasty before it begins. A waif from Kigen's gutters begins a friendship that could undo the entire empire. A new enemy gathers its strength, readying to push the fracturing Shima imperium into a war it cannot hope to survive. And across raging oceans, amongst islands of black glass, Yukiko and Buruu will face foes no katana or talon can defeat.


The ghosts of a blood-stained past.

From Goodreads:
A TREMBLING EARTH
The flames of civil war sweep across the Shima Imperium. With their plans to renew the Kazumitsu dynasty foiled, the Lotus Guild unleash their deadliest creation—a mechanical goliath known as the Earthcrusher, intended to unite the shattered Empire under a yoke of fear. With the Tiger Clan and their puppet Daimyo Hiro in tow, the Guild marches toward a battle for absolute dominion over the Isles.

A BROKEN REBELLION
Yukiko and Buruu are forced to take leadership of the Kagé rebellion, gathering new allies and old friends in an effort to unite the country against the chi-mongers. But the ghosts of Buruu's past stand between them and the army they need, and Kin's betrayal has destroyed all trust among their allies. When a new foe joins the war tearing the Imperium apart, it will be all the pair can do to muster the strength to fight, let alone win.

A FINAL BATTLE
The traitor Kin walks the halls of Guild power, his destiny only a bloody knife-stroke away. Hana and Yoshi struggle to find their place in a world now looking to them as heroes. Secret cabals within the Lotus Guild claw and struggle; one toward darkness, the other toward light. And as the earth splits asunder, as armies destroy each other for rule over an empire of lifeless ash and the final secret about blood lotus is revealed, the people of Shima will learn one last, horrifying truth.

There is nothing a mother won't do to keep her children by her side.

My first review of Stormdancer
My Review:
These books! Oh, these books! I knew that I really enjoyed Stormdancer, and then oh, boy, I just devoured Kislayer and Endsinger for more Yakiko and Buruu! And while we got more POV's as the series went on, we still had a lot of this awesome pair!

Reading these books, especially the later ones, hurt. Like most of Kinslayer and Endsinger, they hurt so much, there was so much loss, and it hurt. It was a war, and it was bigger, and different, then it was in the beginning.

It's hard to imagine that these books are in the same world, almost. So much changed in them, from Yakiko in the beginning of the series, to the end. When she's 27. 16 to 27. Most of it from 16-17, the 27 from the last two chapters. Yeah. Lots and lots of changes!

There were so many twists and turns! Like, the reason for the lotus! And these secrets! Just so many! And while there were little clues that pointed us one way, they also had the possibility of going a different way that we couldn't imagine, but that Jay Kristoff did, and it was just so great!

But just those hard parts of Endsinger, all those deaths, it's like, why couldn't they be prevented! Especially the earlier one that hurt both Hana and Yakiko so much! It's like, that was a huge overreaction that caused a lot of trouble!

Endsinger. We've heard about her since the beginning, and the whole situation kinda sucked. She died giving birth to the land, and she's a mother. She just wanted to be with her kids. Can't blame her for it, but what they did to get to her really sucked!

Just an awesome, awesome series, with that killer ending that hurt so much, was so bittersweet, with those last words bringing back to the start of Yakiko and Buruu's relationship, so sweet!